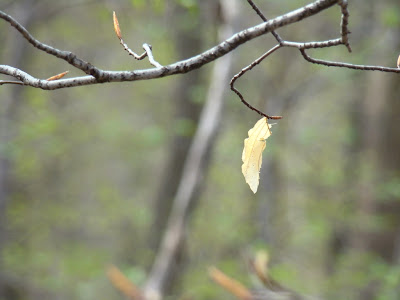 The forest’s marcescent leaves are finally starting to come down. Some of the younger beech trees held onto their leaves the longest but even those are now starting to fall. This means the beech trees will soon produce their new leaves for this season. For the past few days, before the marcescent ones began to fall, the forest looked a little odd. Some trees were pretty well-leafed out or at least well-budded but others still held onto last year’s dead leaves. It looked like two seasons on display at the same time. Even in today’s photo, you can see the green shades in the forest behind this leaf.

I am noticing big differences in spring growth between what’s going on around my cabin and what’s leafed out down off the mountain. Off the mountain, the redbud is in full bud, but up where I am, the color on the buds is just beginning. The dogwood is much the same—very pretty down in the valley but still early on up where I am. And "up where I am" isn’t all that up. I live at about 1000-1050 feet above sea level, while the valley is around 300 feet above sea level. It’s not as though the altitude is profoundly different between where I am and where most people live, but it is enough.

It is different enough in other ways, too. And for that I am thankful. I have lived up here long enough that I don't think I could go back to living in the valley again. That I don't ever want to goes without saying. I have reached the point where I routinely wonder how anyone can live where nature is held at bay with lawns and box stores and highways. I am sorry to be the exception rather than the rule. Truly, "up where I am" is where I want to be. But sometimes I feel a bit like a marcescent leaf myself--the last one, still hanging on.
Posted by Carolyn H at 10:17 AM

What a great post Carolyn. I know just what you mean. I think people long for your kind of life though and that is why they love to read about it.

We live at 3100 feet ... where the air is clean! When we go to the coast we wonder how we ever lived there so long!

I can't believe you don't have any hummeringbirds. Where is our bunch ?

I know that feeling too, though I get it more with my poetry. I see what's getting published and I too feel like I'm all by myself.

However, put me in a city and I'll go slightly mad too.

Dana: My kind of life isn't all that difficult to get to. Maybe I should come up with a list of things to do bring nature to wherever people are now. Thanks!

Cicero: I'm not even sure Pennsylvania goes to 3100 ft., though it probably does up in the Alleghenies. Not around here, though.

Cathy: No hummers yet, but I haven't put the feeder out either--another job for this weekend, I think.