One after the other 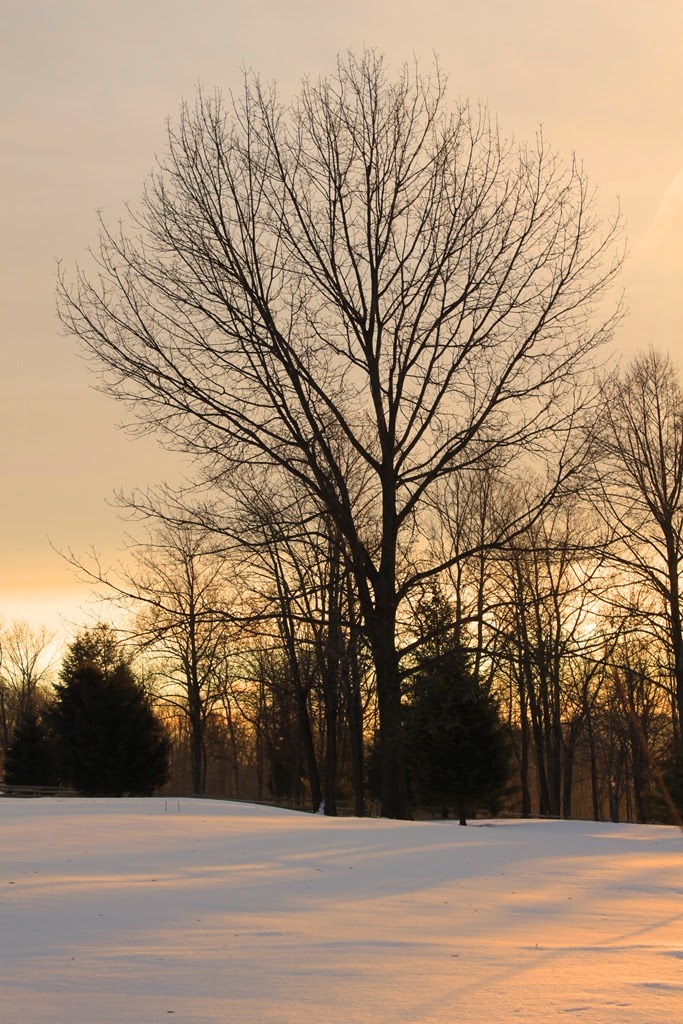 Snowstorm after snowstorm. That’s how this winter is shaping up here on Roundtop Mtn. It’s a good thing most of the storms so far are small, as I can barely clean up from one before the next one follows a day or so later. I think three days between storms is the longevity record so far.
I am starting to feel that I am turning the corner on the cold I’ve had this week. It’s kept me cranky and indoors far more than I prefer. The dogs aren’t getting much in the way of walks, which means they have considerably more energy than I do. If only I could teach them to shovel snow, I would be further ahead, and perhaps that level of work would tire them out, leaving me warm and resting inside. It’s a pipe dream, I know. Skye would eat the shovel before he cleared any snow. Sparrow would forget about shoveling in favor of chasing the neighbor’s cats. Baby Dog is now nearly elderly herself and would deem shoveling beneath her in any case. 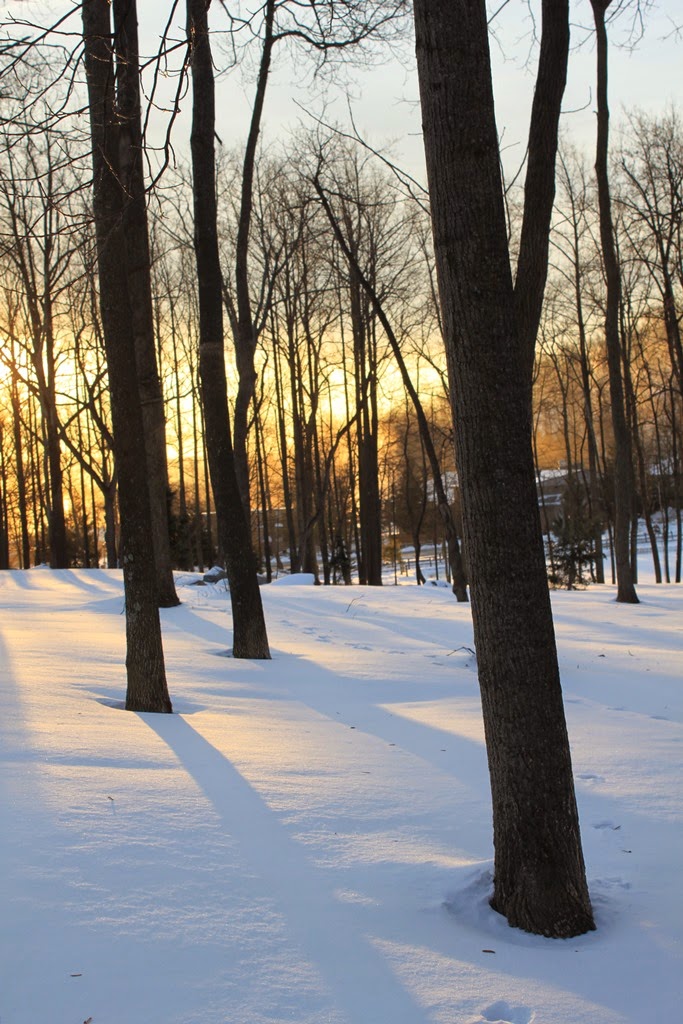 As yet, I haven’t seen any interesting winter finches at my feeders. Some are around. Repolls were spotted to the east, and some siskins have been reports. I have three goldfinch appear about once a day. I’ve discovered that I don’t have one very hungry male cardinal, but instead three of them who take turns at the feeders. After a slow start, the juncos have figured out how to eat from the tube feeders. They prefer the platform feeder, but that gets covered with snow about every other day, and I don’t always get out there to clear it out again.
Years ago, I lost all my Carolina wrens when two large snowstorms likely buried their hideout. It took years for the species to reappear on Roundtop. At the moment I have at least two and possibly three of them regularly at my feeders. So far they are doing okay, because the storms haven’t been large ones.
Sparrows, with the exception of the juncos, are in short supply. I’ve seen a white-throated sparrow exactly twice this winter. Even the usually ubiquitous song sparrows are in hiding.  It’s not even midwinter yet, but I feel as though this winter is already a long one.

Posted by Carolyn H at 1:30 PM 2 comments: Links to this post

I’m not buried in snow, but there’s still plenty of it about on Roundtop Mtn. Roundtop was hit pretty hard by the infamous "Snowtober" in 2011, so I’m not unhappy about missing the worst of the current blizzard that’s burying Boston today.
Even the amount I have on the ground must be hard on the forest residents. Baby Dog and I saw three deer this morning, which prompted me to wonder how and where they sleep in this poor weather. There’s a nice tangle of brush in a low-lying area that offers good screening in summer, but nothing is dense enough there to keep them from becoming snow-covered as they sleep. Perhaps they don’t mind. I know puppies Sparrow and Skye act as though they would be happy to spend hours in the snow, racing back and forth. I can easily imagine they would curl up and sleep in it if they had to.
That said, this weather must still be hard on the wild animals, and not just because it makes finding food more difficult. No place that I can see offers much in the way of protection from the wind, let alone the snow. When the chickens are out, they soon retreat under my raised cabin, where the snow doesn’t reach. Perhaps it is also warmer under there, too, but even that doesn’t provide much protection from the wind.

Everywhere I can see is snow-covered, and the little dips and gullies in my hilly forest don’t look as though one offers any more protection than the next place. All of which makes me glad to be indoors and warm when I sleep. I have winter backpacked when it was -20F, but I was in a tent and a warm sleeping bag, and the wind wasn’t howling, nor was I in a blizzard at the time. Clearly, the forest animals are hardier than I am, though I still can’t help but feel sorry for them living outside in this weather.
Posted by Carolyn H at 12:22 PM 4 comments: Links to this post 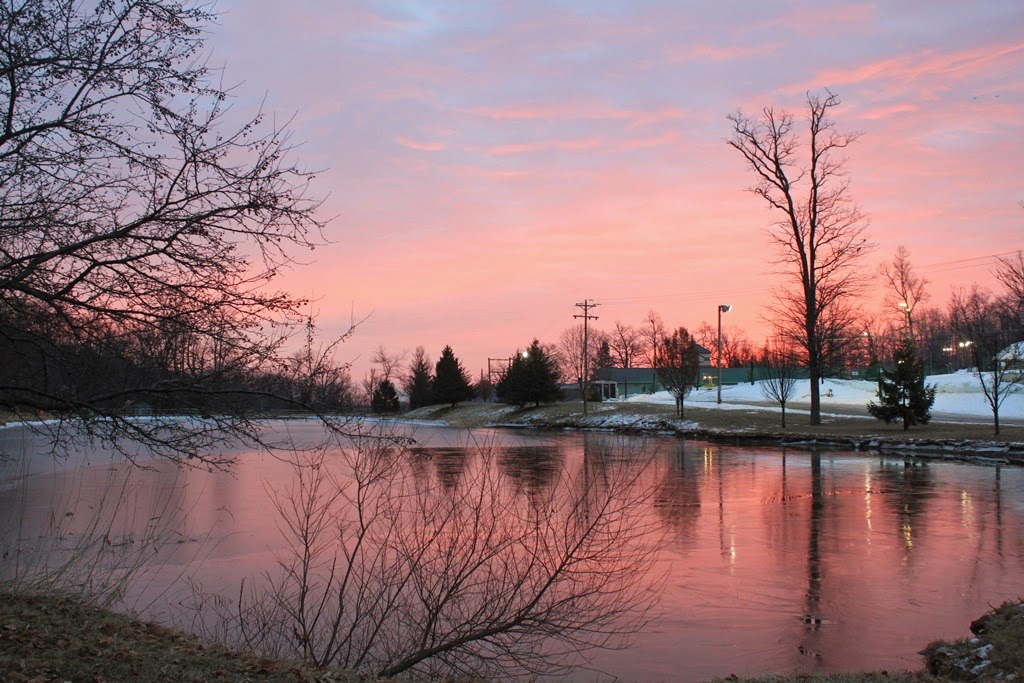 A few inches of snow fell yesterday. It was the light powdery kind of snow that soon starts to compress under even that slight a weight. So this morning the snow already looks less than it did last evening. I am harboring a cold, which makes me want to huddle next to the fire, wrapped in a blanket and sipping a cuppa hot tea. Unfortunately, the puppies want to run full tilt through the snow, noses buried, back and forth for hours. We have not yet found a compromise that suits us all. 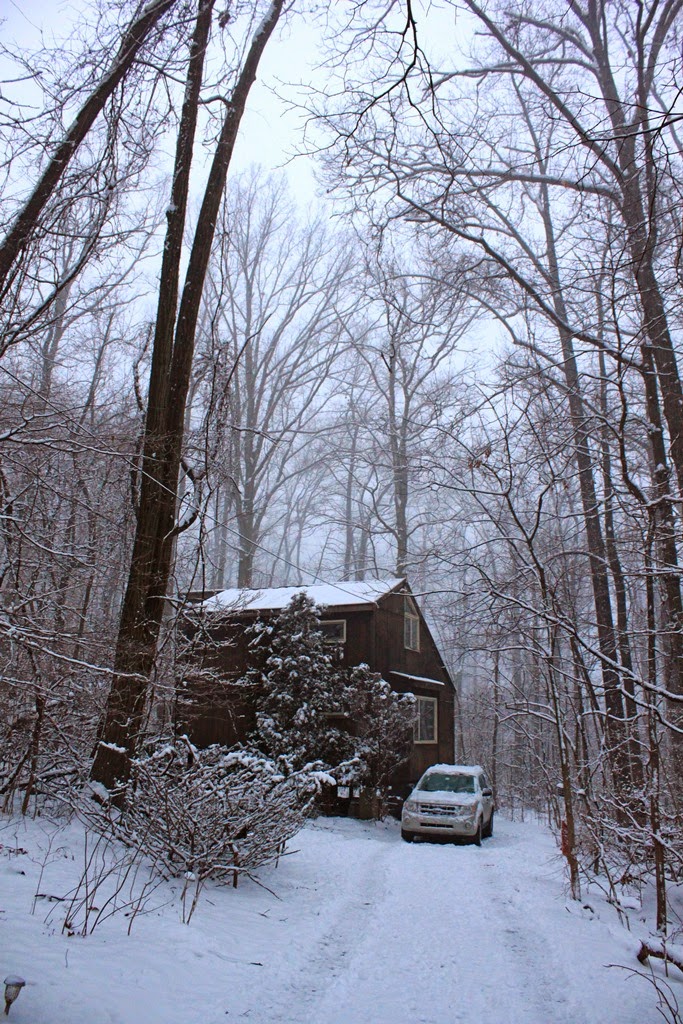 In addition to today’s snow photos, I also am posting a photo of the sunrise of the day before the snow. That red-sky-at-morning thing is really true. And as long as the sailor’s-warning part of the old rhyme doesn’t turn out to be something really awful, the red morning skies can be appreciated simply for their beauty. 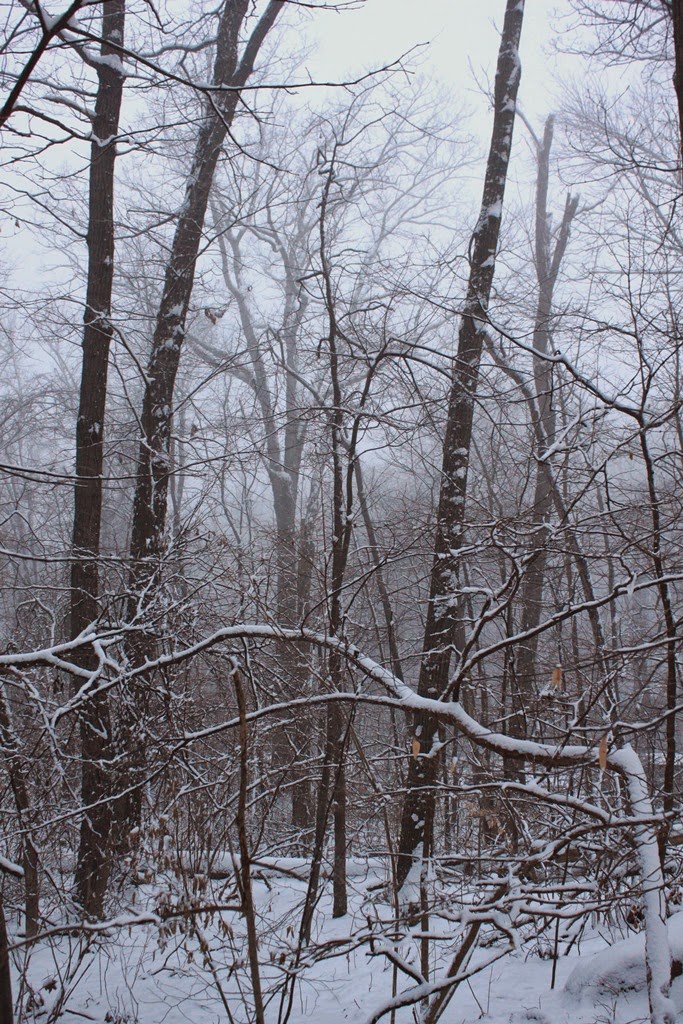 Thus far, the January here in southern Pennsylvania is turning out to be colder than average and could end up in the top 15 of coldest Januarys. It won’t touch the infamous 1994, of course, when the coldest ever temperature recorded in this area was reached at a bone-chilling -16 and the day before at a -12 or so. Two days like that skewed the entire month that year.

Although 2014 was the warmest year ever on record, in my area the temperature was one of the few areas of the globe that registered below average. That may explain why some people here still aren’t convinced of climate change. To them, if they don’t see it where they are, it doesn’t exist. 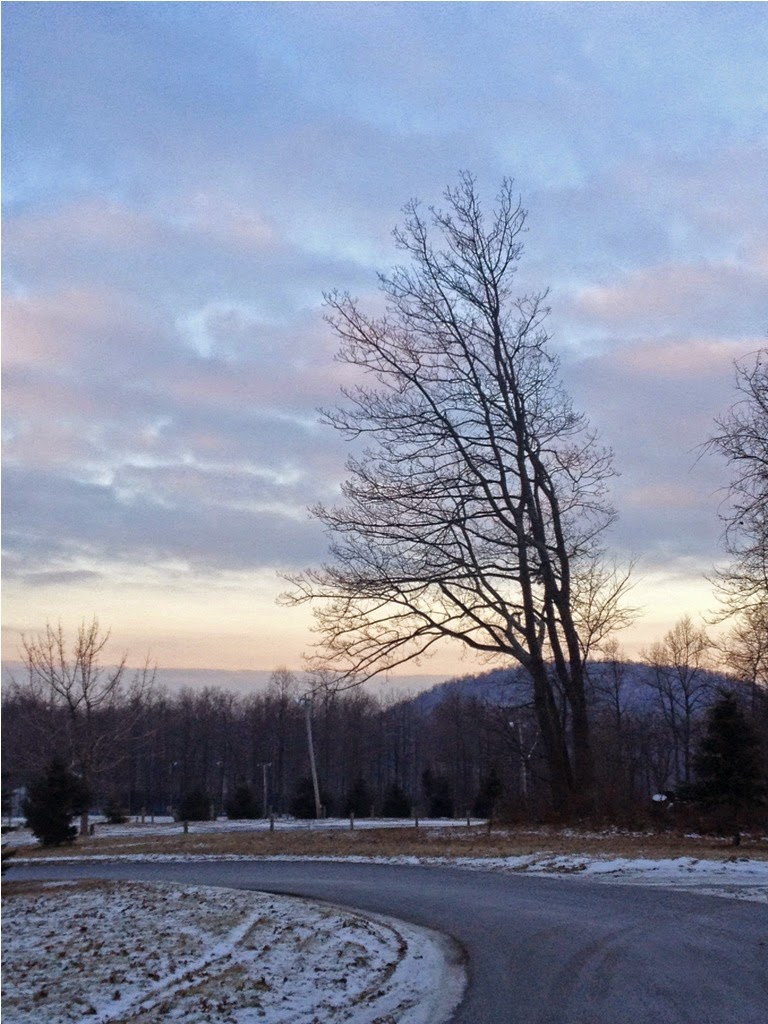 Overcast and gloomy skies are certainly dominating this winter so far.  That’s unusual for this area, where a sunny winter is more typical.  The cloud cover and shortened hours of daylight make it difficult for someone like me, who works away from the cabin, to get photos in either the morning or evening.  The progression to longer daylight seems utterly halted by the overcast sky.  Most of the time I couldn’t even tell you where the sun should be, as not even a bright spot can be found overhead.

This time last year, I found the sun rising through the forest at the time I normally head out to work. This year, not yet. This morning did bring a few moments of brighter sky before the sun disappeared into the cloud cover yet again.  The harsh cold of last week is abating somewhat, though the temperature remains below freezing, if no longer by double-digits.

The mountain roads were skating rinks for a while.  Seriously, hockey games or triple lutzes could have been done for a few days. I slipped even in my trusty Yak-trax.  Yesterday, a thick layer of stones was applied to the roads, and that helped a lot, though my Yak-trax are still firmly attached to my boots.  I am just happy that I can get the car up the mountain now and so don’t have to slip and slide a quarter mile down the mountain to my car.  It’s the little things that matter.
Posted by Carolyn H at 3:36 PM 1 comment: Links to this post

I apologize for the lack of posts lately. It’s a bad combination—the need to acclimatize the camera in the cold weather and the fact that it’s not light enough for photos before I leave for work and too dark for them when I get home. However, the days are lengthening, if at a very slow pace, and soon one end of the day will be good enough, if still marginal, for photos.


The cold is abating, if only for today. And truthfully, although cold, it’s that wind that’s made the weather so brutal. Four degrees Fahrenheit and a 25 mph wind do not make for pleasant outings. However, this morning was 14 degrees with calm winds, and I have to say it felt balmy to me.


I do believe two summer fawns or perhaps a summer fawn and a small doe are sleeping almost underneath my cabin. Last evening as I was walking Baby Dog for the last time, we walked past the 40-year old juniper bush at one edge of the cabin. The bush is huge, as I don’t trim it, and serves as a hiding place for various birds or the semi-feral cats.

Baby Dog was entirely too interested in that spot, and I was anxious to return to the warm of the cabin, so I pulled her away. We went out to the end of the lane and came back—poor dogs are only getting short walks in this weather—and as we passed the juniper bush, two deer crashed out of that area and trotted up the mountain. Apparently, walking past them once was okay, but our return trip was too much for them. I was sorry to have startled them away from their warm bed. I hope they returned after we settled inside for the night. And now the mystery is solved. Odd that they settle so close to the cabin, but I guess the lure of a protected spot out of the wind is that great.
Posted by Carolyn H at 10:27 AM 1 comment: Links to this post

It’s a gray and blustery day at Roundtop ahead of some light snow expected tomorrow.  The wind roared and howled all night long, with gusts nearing 40 mph. The temperature is now nearly 20 degrees colder than Sunday and will drop another 25 degrees before it’s done.  Winter has arrived.

I spent yesterday adding more straw to the chickens, snug in their winter pen, digging out my Yak-trax and my mid-winter parka—my winter chores. This blast of winter will last, in varying degrees, about a week.  Wednesday and Thursday look to be the coldest days, and by then the chickens will get another handful of straw.

Last night I wondered if the coyotes were around again.  Not as close as they were last week, but somewhere relatively near. The wind was from the west, and late in the evening Baby Dog faced the wind and began to bark that deep, serious bark of hers.  I scoured the forest with my headlamp but saw nothing.  With the wind as fierce as it was, their scent may have traveled quite some distance, perhaps even from the next mountain over.  Certainly, I haven’t heard them howling since that night, so they are not near enough to hear that.  But Baby Dog’s unhappy barking led me to believe that something she didn’t like—nearly always a predator—was near enough for her to sound a warning.
Posted by Carolyn H at 2:07 PM 2 comments: Links to this post