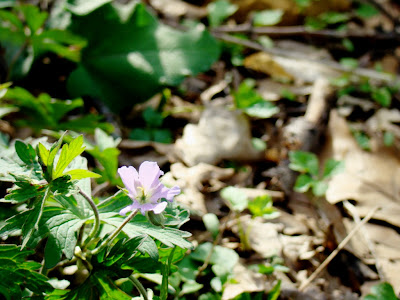 Wild geraniums are common as all get out here in the woods of the eastern U.S., but don't take that to mean I don't like them. They are also one of the prettiest of the native flowers. I'm simply reporting how common they are because if you're reading this from somewhere in the eastern U.S., you can probably find them just about anywhere you can find woods near you. The plants are small, though, so they don't jump right out at you. Wild geraniums are often found with or near mayapples, which are larger and easier to see, and which is where I found this one.


I've looked at a fair number of photos from other places around the east, and the color of the geranium varies a lot from blue to deeper purple, to my pale lilac shade. They are not supposed to ever be white, though. The leaves are heavily toothed.

The arrival of the wood thrush is only a day or so later than average. I still have only heard one and I haven't yet heard or seen an ovenbird, which usually arrive on the same bus with the wood thrush. Maybe today.
Posted by Carolyn H at 6:46 AM

Oh, so pretty! I saw lots of leaves of Wild Geraniums here yesterday, but no flowers yet. I agree, they are very pretty flowers!