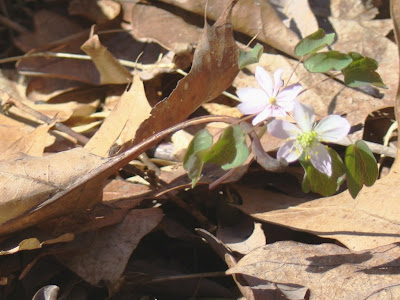 At the moment, spring 2008 is just slightly ahead of spring 2007. Last year’s first spring beauty photo was posted on April 17. I’ve discovered that blog labels are an excellent and fast way to facilitate keeping track of such things. Keeping track of the first this and the last that, especially in this era of global warming, should, eventually, offer fairly immediate documentation of the changes. Likely everyone else discovered this fact years ago, while I am only now realizing how nicely that feature can be used. I haven’t always been so diligent with my blog labels, though, so I’ve started going back through my archives and updating them.

Bloodroot is also about ready to bloom. I’ve expected to see the blooms open for the past three days, but so far they’ve all been closed during the hours I’m at the cabin.

Migration has slowed again here on the mountain. The winds have been from the northwest the past two days, and since birds heading north don’t much care to fight headwinds, they are likely sitting tight and waiting for more favorable winds.

I’ve had frost the past two nights, and I think that is what has temporarily quieted the spring peepers. Still, even with the chilly mornings, the new season has now progressed to the point where even with frost in the mornings the days still feel like spring.
Posted by Carolyn H at 8:23 AM

We had winds from the Northwest yesterday too ... brrr chilly again!
The veriest skiff of snow early this morning but now the sun is peeking out.

I hadn't thought of that as a use for blog labels. It's a good idea.

Hi Carolyn. This is similar to a white flower I found last week, yet mine has more petals and more scalloped leaves. Yet they are very similar. I'll post on my cabin blog, and if you have time, see if you know what it is. Thank you, Dana

That little flower looks like it's enjoying the sunshine!

Cicero: No late snow here, but it's been cold enough for that in the early mornings.

Dana: I'll check our your flower and see if I know what it is. Have you thought of wood anemone?

Ruthie: I'm enjoying the sunshine, too!

I don't mean to be ornery... but I don't think this is a picture of Carolina Spring Beauty. I think it's Rue-Anemone.