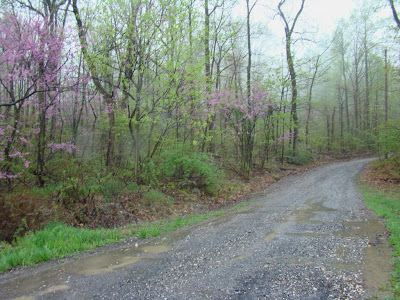 April is bustin’ out all over.

Wait. No, that’s not how it’s supposed to go. Well, supposed to or not, that’s what’s going on here at Roundtop this morning.

The leaves aren’t unfolding, peeking out or even developing. They are exploding into being. Not only can I see changes from day to day, I can see them from morning to night. And if I was home, I expect I could see the change from morning to noon and again from noon to night.
Yes, Virigina, there is global warming. The forest around me looks like it does in mid-May. Late April isn't normally this lush.

This morning I’d no sooner stepped off the deck and looked up towards my ever-shrinking view of the sky when I saw an osprey heading north. Seeing an osprey at 7 a.m. is unusual, though it shouldn’t have been a complete surprise. Osprey often migrate into the evenings until it is too dark to see them. I’ve stumbled off Hawk Mountain’s North Lookout enough times to know that. Seeing them so early in the mornings isn’t as common but osprey do seem to be one of the raptors that is less averse to twilight flights.

The red foxes were also out and barking this morning. I’m pretty sure they have a den not far from the cabin. The barking was quite close and was answered by the second fox just on the other side of me. When Dog and I walked this morning, he suddenly got very excited when we passed one section of the lane, and I would almost bet that’s where the second fox crossed as it headed back to the den after a night’s hunt.

I suspect the den is near a seasonal stream just below the cabin, perhaps 75 yards away. The area is rocky and sheltered by a riot of undergrowth. Downed trees of various sizes make entering the spot virtually impossible. Some weekend day soon when it’s not raining, I’m going to find a spot to sit where I can observe the area and see if I can prove if my guess about their den is correct.
Posted by Carolyn H at 4:12 PM

I am certainly no denier of climate change, but to say that a lusher April indicates global warming (Yes, Virigina, there is global warming.) is not correct. Weather varies annually. Climate cycles are longer several decades to centuries long.

If I were to use the same backyard reasoning here in se BC I would say its getting cooler. An unusually cool spring, after an unusually cold and snowy winter.

Here's an interesting chart that shows changes (altho only in the decade perspective): http://tinyurl.com/6o2r8d

Climate change it is, global warming, not.

Is it easy to distinguish a fox bark from a regular dog bark? How does it sound?

Yes this year the leaves seem to be shooting out instead of opening slowly. Yes it's a bit of shock to wake up and see green that wasn't there yesterday. I'm wondering if it's because Winter was slow getting out of here. Well I'm enjoying the new leaves.

Oh go to my blog, look who finally show up in my yard.

Pablo: a red fox bark is very hoarse. It almost sounds like a dog is barking but without a voice box. It reminds me a little bit of a deer snort, as there's more a sense of air passing than a voice. It's loud, though.