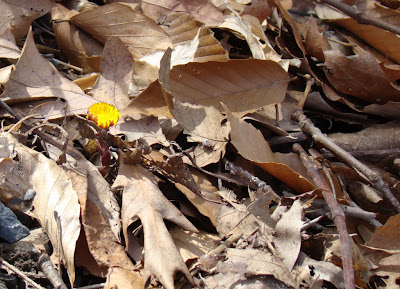 Today’s photo is a coltsfoot flower, the first flower in my area in this or any other year. Coltsfoot is so anxious to bloom that it pokes its yellow head out even before its leaves appear. This year, the flowering is right on schedule, blooming as it usually does the first week of April. Last year the bloom was late because of a severe cold snap during late March and early April.

Except for this single coltsfoot flower, spring didn’t move forward very much this past weekend up on the mountain. The weather is grey and gloomy, with only momentary appearances of sun or blue sky. It has been that way since the middle of last week. It is still that way this morning.

I went birding on Saturday morning but have no new spring residents or even new non-residents to report. The spring growth on the forest floor is a little higher every day but only a little. The trees are not yet budding, though the leaves of a few shrubs are close. Yesterday, the cats were entranced with the sight of a squirrel ripping the leaf buds off what I think is a wild rose shrub. The bird feeder was full, so presumably the squirrel was just looking for a fresh "salad" after a winter of seeds and nuts.

It feels as though spring is taking a bit of a breather right now. After the giddiness of its first appearance, nothing much visible is going on right now, though I expect the plants are all stretching in the soft earth, their roots waking up. Just because I can’t see anything new right now doesn’t mean spring isn’t going on underneath the surface of my feet.

I took photo #2 in my experiment (see entry of March 26) of seeing the changes in the forest as spring progresses. It’s been exactly a week since my first photo. So far, I can see no differences that I’m sure of. It’s possible the moss on one of the boulders is brighter and greener, but it’s also possible this is because the second photo was taken in a moment of sunshine and the first was taken during an overcast sky.
Posted by Carolyn H at 8:49 AM

Yes, what happen to Spring?. One does get tired of wearing a winter jacket.

First time I have ever heard of Coltsfoot. Looked it up and was surprised to find out about it's medicinal properties. Also that an old name for it was, "Filius ante patrem (the son before the father), because the star-like, golden flowers appear and wither before the broad, sea-green leaves are produced." Thanks for sharing and piquing my curiosity.
Vern

Vern: i've heard other names for coltsfoot, but never Filius ante patrem before. That's a great one, and a good name considering how it blooms first and leafs later.

Cathy: I've put away my heaviest winter coat, but the fleece jacket is still getting a lot of use! I tried going to my fleece vest instead but that was pushing it just a little too far.

Ha! We must be in sync! I'm doing a post on Coltsfoot tonight!

Jennifer: Our forests must be in sync if your colstfoot is blooming the same time as mine!