The Textures of the Forest 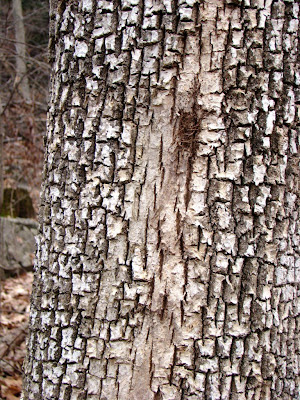 This week, perhaps because spring’s progress has stalled a bit, I’m taken with exploring the texture of bark on the trees of the forest around the cabin. This one is white oak. It’s a good-sized tree, likely 75 years old or more, one of many of a similar size around my door.

Each tree species has its own particular bark pattern. I know most tree species by their leaves but I’m still learning the bark patterns. As with anything, the most distinctive ones are the easiest to learn. The bark of the American beech is smooth and gray in a sea of brown. The bark of the wild cherry has horizontal stripes. The name shagbark hickory is a good description of that tree’s bark.

In the evenings, after dark and when I’m not outside, I’ve been rereading a bit of John Muir lately. I’ve read him before, of course, but it’s been a while since I’ve read Range of Light. Muir’s writing is so magical so frequently that he’s a bit like nature itself. Every time I read his works, I’m struck by something, but it’s always a different something than what I’ve noticed before. Today, I came across this paragraph that has particularly resonated with me:

"As long as I live, I’ll hear waterfalls and birds and winds sing. I’ll interpret the rocks, learn the language of flood, storm and the avalanche. I’ll acquaint myself with the glaciers and wild gardens, and get as near to the heart of the world as I can."
And perhaps that’s what I’m trying to do, though without the poetry of Muir’s words. When I first moved to my cabin in the woods, I saw what most jumped out at me—birds, mostly. Later, I learned what tree species were in front of my door, and I learned their leaves. Now, I am going deeper, learning the trees by their bark and flowering plants by their leaves before they flower. I am getting closer to the heart of the forest.

Every day, there is something new to see, something new to investigate and learn about. What I learned last year or the year before that is no longer good enough or deep enough or even just enough. And knowing that I will never reach the end of what there is to learn is somehow very rewarding and comforting to me. A lifetime will not be enough, nor would 12 lifetimes, but that’s okay.
Posted by Carolyn H at 9:41 AM

I love images showing patterns and textures of things in the wild. The closer you look, the more you see and wonder why you never noticed before.

And our world seems most often to teach that a full life has to do with the accumulation of things and experiences. You have chosen a better path.
Vern