An Evening in the Woods 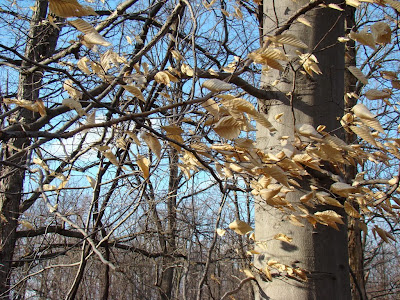 The rain cleared late in the day, and the evening was beautiful, if windy. As you can see, the marcescent leaves on this American beech tree in my front forest are still hanging on. I'm starting to see buds on a few of the smaller trees and shrubs, so these remnants of 2007 surely don't have long to hang on anymore.

Last night the red foxes were barking. I haven't heard them since last fall. The one was very close. The voice of the second had a different sound to it, higher, and was further away. The sound of loons calling and Red-tailed hawks screaming are often mentioned as two sounds that epitomize the wild, but I'm starting to think a fox's barking should be right up there too.

The sound sends a chill down my spine. Something about it always sounds urgent, like a frantic alarm call, even though I tell myself it's just their normal communication. It doesn't feel that way to me, though. Standing outside in the dark and hearing the foxes just 50 yards or so away feels as though I am standing in the midst of some invisible danger--not from the foxes, but of something the foxes are reporting to the rest of the forest. They probably consider me the danger, but I share their primal alarm whenever I hear that sound.

Note: In this area trout lily, dog-toothed violets and yellow violets are all names for the same plant. I hear dog-toothed violet most commonly, though trout lily isn't far behind. This confusion is likely why true plant people use the latin names--no confusion when you use those--but I kind of like the different names.
Posted by Carolyn H at 8:50 AM

I don't think i've heard foxes before, Coyotes, yes! We are told a momma fox and cubs were seen last year around our cabin. I haven't seen them yet. I did recently see a bobcat, not at my cabin, but just a few miles away. He was just off the edge of the road, running away in the rain, about dusk. I have heard them scream at night. That is spooky too!

Dana: bobcats are spooky, and I may have heard one early this morning, but it was so far away, I wasn't sure.

Carolyn, lOl beautiful photo. Don't be afraid of the fox, just let yourself be obsorbed in the sound, that is unless you have chickens. Then you might want to reconsider what they are saying ...lol Thanks for sharing