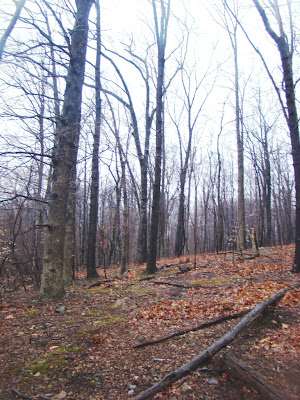 April showers arrived right on schedule here on Roundtop. Overnight a warm spring drizzle has dampened the forest. This morning I stepped outside the cabin and found more evidence of new spring growth than was here just the previous evening. Once spring gets underway, the changes take place rapidly.

The tiny mystery seedlings that I photographed yesterday are already perhaps a quarter of an inch higher, though their identity is still a mystery. Here and there I find more greenery starting to poke up through the ground, leaves still whorled tightly. I expect that the next sunny day will bring an explosion of greenery to the mountain. On a day like that, if I spent it sitting outside, I expect I could see almost hourly changes.

Last evening I was going through my birding records for March and 2008 so far. Nothing about the number of species I’ve accumulated is unusual—in fact that is all very normal. I’ve had some excellent species during the new year—redpolls are about a once every 10 years kind of visitor here. Siskins and purple finch are more common than that but lately I don’t even see them every year.

Every year here on the mountain brings at least a few uncommon species, but there’s no predicting what those species will be. It might be waterfowl or an uncommon warbler or even a shorebird. That’s part of the fun of keeping track of what I see each year.

A few species that I haven’t see yet might be evidence of a migration that’s timed, so far, just slightly later than last year. Last year’s migration seemed early to me, so this year’s later arrivals are actually more normally timed, by my records. March 2008 turned out to be slightly cooler than average overall, a result that gets rarer with each year. So I’m not complaining about what haven’t seen yet, just noting the timing.

In my photo this morning the woods outside the cabin looks a bit dreary. It didn't feel dreary to me. The dampness deadens my footfall through the leaves, and the rising hill draws me towards it. I would have liked to spend the day wandering through these woods. But today duty calls and work awaits.
Posted by Carolyn H at 9:13 AM