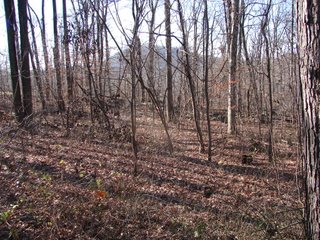 Now that the leaves are all down, I have my view of the western mountain back again. Okay, so this view isn't the Grand Canyon, but after months of not being able to see much further than two arm lengths in front of me, I like this just fine.

November is normally a mean month, usually filled with ice storms, sometimes with deep snows. Freezing rain, sleet and virtually every kind of precipitation possible is the norm. Not this year.

It's been quite a bit warmer than is usual and, with one or two days of exceptions, it's also been quite calm. The weather has been grey and dreary, often rainy, but not cold and not severe. One evening, for a few minutes, I saw rain washed with wet snow on the windshield as I drove back to the cabin. That was the extent of the wintry precipitation.

In some respects, it's still a typical November, despite the warmth. Now that the leaves are off the trees, the forest is quieter than in summer. The occasional creak or slap of one branch against another is a lot softer than the sound of millions of leaves rustling in a breeze. The quiet of winter emphasizes that the trees are at rest.

In other respects, life is as busy as ever. Squirrels abound this year. The birds are busy and noisy at my feeders. Deer, no doubt unaware that in two days rifle season begins here, are plentiful and graze slowly through the forest.

It is the quiet time of the year.
Posted by Carolyn H at 7:40 AM