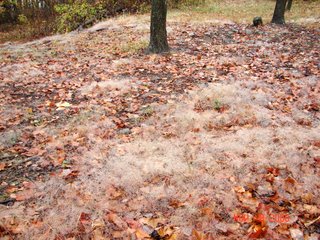 Okay, so it’s not really fairy dust. But that’s what this scene looked like to me when I first came across it. It’s really the “skeletons” of a kind of grass that has gone to seed and was sparkled with rain drops.

Blogger had some kind of major crisis yesterday that prevented me from posting anything. It gave me another scare this morning, but is at least momentarily okay.

The last rain has cleared out, leaving the weather clear and abnormally warm for the moment. That won’t last past today. The last rain storm came from the south, bringing warm weather with it. It is so warm that this morning Dog discovered a very large toad on our morning walk, which he greeted with delight. Having had his own toad encounter years ago when he was a pup, he didn’t try to eat it, the way Baby Dog tried to earlier in the year. Instead he nosed it repeatedly, watching it hop with each touch of his nose. He wagged his tail and seemed to enjoy his discovery. Since the toad was in an area where it might get squished, I picked it up and moved it out of the way, hoping for the best.

The rain that’s forecast for this weekend is from the north and west, and will bring cooler weather with it. It’s as though November is in a tug-of-war, with both fall and winter fighting for control. Winter will win, at least eventually, though if recent years are any indication, it will be a pale shadow of its past years. This is also a mild El Niño year, which during any occurrence usually means a mild winter.

Although the heavy rain I had two days ago brought more leaves down, many more than is normal for this time of year are somehow still attached. Until yesterday and today, this fall has tended towards the cool side, at least that’s what the local weather dude reports during his daily report. So I’m not sure I can blame global warming for the trees not being bare of leaves. But I'd like to.
Posted by Carolyn H at 10:26 AM

Ah it was a nice today. I'm sure the toad just love being nose by Dog. Good thing it wasn't a snapping turtle

Neat picture of the "fairy dust". I thought at first it was snow!

I just found your blog and must tell you I've really enjoyed browsing your archives. I'll be a regular reader.