Back at the Cabin 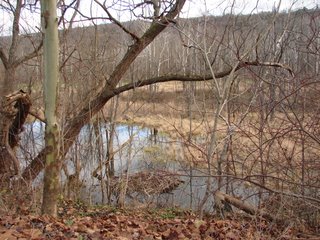 Grrr! It's so annoying to come back from somewhere only to find Blogger on the fritz this morning.

I’m back from a weekend of work and fun at the Cornell Lab of Ornithology in Ithaca, N.Y. I went up for a Hawk Migration Association of North America board meeting but managed to find time for some fun too.

I went up with Kim Van Fleet, a Pa. HMANA board member, and we stayed at a little motel called the Greyhaven, just on the south side of town. It’s a mom-and-pop motel. We were attracted to it because it was less expensive than anyplace else and because it had a wetland out back. The photo is of a beaver dam in the little wetlands. I didn’t see the beaver but it was an active lodge judging by the freshly cut twigs on it.

Our meeting was held at Cornell’s Lab of Ornithology at Sapsucker Woods on the north side of Ithaca. There’s a little pond and a bird feeding area. We saw lots of Canada geese and a few mallards. At the feeders were black-capped chickadees, downy woodpecker, America 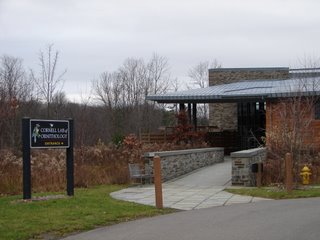 n goldfinch and several of the biggest gray squirrels I’d ever seen. We immediately dubbed them large enough for one to feed a family of four and decided they were likely a squirrel and chinchilla cross since they were so big.

In the evening Kim and I went to the famed Moosewood Restaurant for dinner. You’ve probably seen one of their vegetarian cookbooks. The Moosewood is run by a collective of folks, some of who have been there since the counterculture days of the first cookbook. It’s a small restaurant, very reasonable prices, with excellent food. They usually offer 4 entrees a day, one of which is usually fish, the other 3 are vegetarian.

Tomorrow (if Blogger cooperates): Inside the Lab
Posted by Carolyn H at 10:32 AM

What did you think of the Greyhaven Motel?

I liked the Grayhaven. It is small, family-owned, a non-franchise motel with a beaver dam out back. It's a few miles out of town, cheaper than most everything else in the region. When I was there, several hunters were also there. It's not fancy and it's not new but it suited me well enough. I'd go back.