Once inside Cornell’s Lab of Ornithology, what struck me the most was the artwork. It’s everywhere, both in the public spaces and in the private and office areas as well. We were metting there over a weekend, so even though we were back in the office areas and touring the lab, we didn’t get to see ornithological research in action.

The first photo is a sculpture of an ivory-billed woodpecker. I just love his party attitude! Although you can’t see it, on his binoculars are written the names of other extinct birds. Everywhere you go at the lab, you'll see lots of ivory-billed woodpecker things--the gift shop is full of them. (This guy's not for sale) 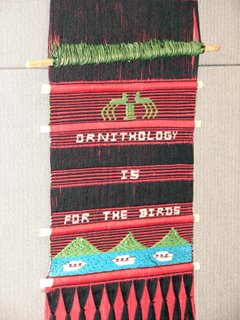 The next is a weaving I saw back in the publications department that says “ornithology is for the birds.” The publications folks are grouped up on the second floor, and considering the wealth of magazines such as Living Bird, newsletters for members and their citizen science initiatives, it's a pretty small area with not many people.

One thing I didn’t know is that the Cornell lab also does research on vertebrates, so the skeleton of this giant python is back in their department. The walls were covered with posters that summarized individuals' ongoing research.

They do lots of bioaccoustical work, including on the too-low-for-human-ears-to-hear sounds that elephants make to communicate with other elephants over long distances. Naturally, most of their accoustical work is on birds, and their library of bird sounds and songs is unrivaled. They also use their accoustical library for commercial work. They've done the soundsfor the Harry Potter movies, for example. 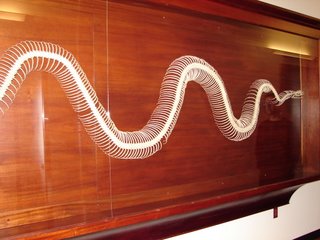 But the highlight of the artwork are the originals done by Fuertes. I'll show some of those paintings tomorrow.
Posted by Carolyn H at 9:01 AM