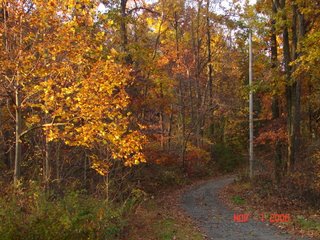 I took this photo this morning as I was leaving for work. Most of the fall color has faded to an dull orangey-brown, but it's still pretty when the sun hits it.

Because I live on the grounds of Ski Roundtop, I’m allowed to use the resort’s dumpster for my household garbage. This is not completely altruistic on their part. The garbage truck won’t come back my private road, and I’m sure Ski Roundtop doesn’t want a week's worth of my garbage sitting at their front gate while it waits for the garbage truck. I say this in preparation to help explain my story.

After I got home from work and did a little cabin cleanup, I ended up with one white kitchen-sized bag of trash, which is about one week’s worth of trash for me. To dump the trash, I loaded the bag in the car and headed down the mountain to the dumpster, which is a little over .5 mile from the cabin. Because of the time change, my early evenihng trip was made after dark.

So I drove down my lane and onto the Roundtop access roads, passing one of their snow-making ponds. I saw a white-tailed deer cross the road in front of me. I slowed down to let it pass. It was in no hurry and probably had just gotten a drink out of the pond. I’m surprised it wasn’t at least a little warier, but it wasn’t. I watched it amble across the road and into an area with trees that Roundtop has cleared of underbrush (wouldn’t want those city skiers to see real, live underbrush in the woods). Then I saw a second deer near the first, this one lying down in the cleared area and already bedded down for the night. Now a cleared area next to an access road isn’t a typical spot for a deer to bed down in, but deer have never been known to be rocket scientists. Slowing down my car to take a look was all it took to convince the deer that this wasn’t the best place to sleep, so it got up and calmly walked into the woods (the real woods not the cleared version) and disappeared.

I continued on my way but hadn’t gone more than another 100-150 yards when I see two more deer, these munching grass by the side of the road. These are slightly more suspicious than the first two and wag their tails as they watch me pass but don’t run off.

After that the trip to and from the dumpster was uneventful, but when I returned to the cabin after being gone little more than 10 minutes, I discover one of the large local raccoons on my front deck eating cat food. It doesn’t move when I pull the car into its spot next to the front steps, but it does move when I get out of the car. It scurries away, down the steps and off the deck, but not without first grumbling at my disturbing it. It disappears under the cabin, still grumbling.

There is no moral to this story unless it’s just that I’m always surprised what suddenly turns up in just a few minutes when I’m outside the cabin door. There’s never a dull moment.
Posted by Carolyn H at 8:45 AM

I think the wild things are beginning to consider you one of their own.

While your fall colors are fading, ours in southern New Jersey are just nearing their full glory. The hickories are magnificently brilliant; the oaks are still mostly green. This morning (Nov 2) the white throated sparrows have arrived in flocks. Last week I saw only one.