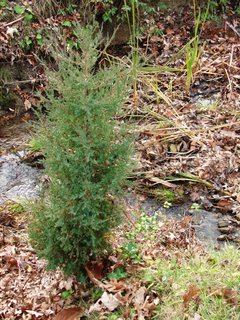 One sign of how warm this November has been is the open water here on the mountain. I only had one hard freeze and several lighter frosts this month. This is highly untypical of November.

I'm also tired of hearing the local weather folks extol the virtues of the warm weather, as though it's a fine thing to have temperatures in the lower 60's when it should be at least 20 degrees colder. They don't seem to get that weather this warm this time of year isn't a good thing. To me the warm weather is just another sign of just how out of whack our poor old earth is. I think it would help keep the warming problem in front of the average person if the weather and news people would at least occasionally treat the warmth like the problem it is.

In the fall here, the leaves are now dropping a good two weeks later than usual. The waterfowl that normally fill the skies are completely, and I do mean completely, missing. They haven't had to fly south this year--at least not so far.

However, it's in the spring where I notice that the early leafing (about two weeks early) is doing the most damage. The spring warblers fly up from south and central America and over the eons have managed to evolve themselves to time their arrival up here with the appearance of the insects and worms they feed on. The insects and worms appear when the leaves first start to come out. Because the leaves are now coming out so much earlier, those insects and worms are also coming out earlier, and by the time the warblers get here the things they feed on are gone or too big or have developed into other things and the warblers can't find or eat them.

Roundtop has never been the kind of place where I could find 20 species of warblers in a day the way you can at the warbler hot spots. But I always could find 20 species during the entire season of warbler migration. Last year I had 3 species. Worse, instead of the 50-60 individuals I could always find, last year I found 8, of which 6 were the yellow-rumped warbler (the most common species). I had one black-throated green warbler and one black-throated blue warbler and that was it.

When I see open water everywhere and wear short-sleeved shirts in November, it's not a good thing. It's a wrong thing. It's the earth's way of trying to tell us that.
Posted by Carolyn H at 9:44 AM

The weather just made a seasonal course correction out here in Missouri. We were in the 70s last week, and now we have snow and temps in the teens. I think the weather has finally made up its mind.