Snow on the Way! 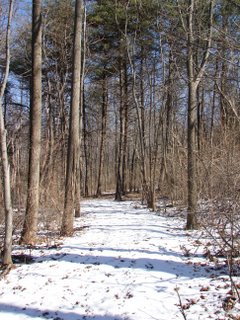 No, I didn't take this photo this morning. New snow has already started to fall this morning, with storm predictions ranging anywhere between 6-12 or even 16 inches. I didn't take a new photo this morning as I left for work while it was still dark, with the idea that I can then leave work early and get home this afternoon before so much snow has fallen as to make the drive home difficult (And, truth be told, to have some time to shovel/run dogs/play in the snow before it gets dark).

Up until now, this area has had less snow than has ever been recorded to this point in the year. For late December and the first half of January, it was simply too warm to snow. I recorded less than 2" of snow so far this year, the city even less than that. The previous least amount for January was 8", so this year didn't just break that record, it shattered it. Since then, the weather has been more than cold enough to snow, but no storms have come through to drop any.

This morning, I filled the bird feeders with extra seed as I expect the snow will bring a feeding frenzy of birds. I'll be surprised if the feed now in the feeders lasts past noontime. With luck, I will be home by then to refill it. I haven't had any exotic feeder birds this year, or even any semi-exotic feeder birds, but my regular birds are as demanding of their expensive blend of seed as any pampered pooch.

The tufted titmice are especially fun to watch. At least one of them has a preference for peanuts in the shell (which I originally got because the blue jays prefer them). This titmouse will carefully select the biggest double-peanut it can find in the feeder and fly away with it. The peanut shell alone is the same size as the titmouse's head, but that doesn't deter it.

Winter temperatures finally arrived several weeks ago. Now, the winter snow is finally catching up, too.
Posted by Carolyn H at 7:27 AM

They are saying for this area.8-14 of the white stuff. If all goes well the heavy snow will hold off until after I get home from work.

I am heading home shortly, but the snow didn't hold off. It's already pretty bad in the city.

Well it's 1:20pm here and the sun is shining But the snow is knocking on the back door.

It's been snowing here since around 5:30 a.m. and snowing heavily since mid-morning. I barely made it home and up the mountain (rental as my 4x4 decided to break down the day before the storm). I had to walk up to the cabin itself, but I'm okay with that. I have several inches already.