A Walk in Early March 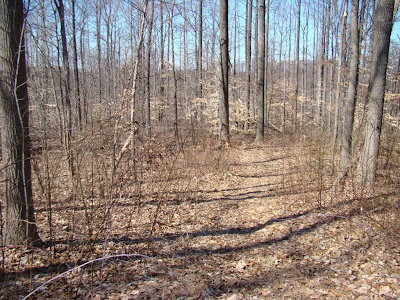 This is how the forest around the cabin looks right now. The ice and snow disappeared Friday night and Saturday in the second of two rains last week. Some of the ice and snow lasted through the first rainstorm, but virtually none of it made it through the second. During the walk where I took this photo, I found a few patches of leftover snow under the leaves, but only under the leaves.

It will be some time before I seen any hint of greenery--another month would be typical. And despite last week's rain, after that storm passed it turned chilly again, and tonight I might even see a bit more snow. Still, it felt odd to walk in the woods and not see any snow. Not much snow fell around my cabin this year, but what fell stayed around, at least up on the mountain. So right now bare ground looks kind of novel to me.

With the arrival of bare ground, I am already starting to see a few of the short distance migrant birds reappear on the mountain. Birds like flickers and mockingbirds, to name a few, disappear from the mountain during winter. They spend the winter in more protected areas at a lower altitude, but the instant the snow disappears or the first warm day arrrives, they reappear. They can't spend the winter more than a few miles away. On this walk alone, I saw 3 flickers and 2 mockingbirds, the first of the year. I've heard red-winged blackbird, too, but haven't seen them yet. This last bird apparently goes a little further than just down off the mountain somehwere, but it's not uncommon for them to winter in northern Maryland, so migration for them is nothing more than a morning's flight.

The rest of the migrants will dribble in more slowly. Phoebe will likely be the first true migrant of the year, sometime later this month. Towhees can be nearly as early, too. Spring is on the way, one species at a time.
Posted by Carolyn H at 8:23 AM

I really enjoy your blog. You are invited to visit mine, which you may like, Cabin Chronicles. I have posted about the green I saw this week, and also the crocus's which have bloomed. Our season is just a few weeks ahead of yours. I hope you don't mind I have a link to yours in my sidebar for quick access.

I enjoy your blog so much im just now getting into Camping but i really enjoy seeing others and getting knowledge from pros !