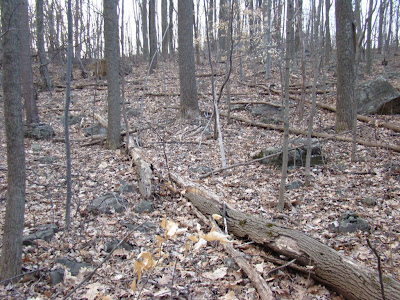 Today’s photo is the start of my own little personal experiment. I took the photo behind the cabin this morning. It’s a view up the hill and to the south. Right now it’s a nice clear view, and I can see to the top of the rise. Once the leaves come out, my view will change quite a lot. I’m guessing that I won’t be able to see any further than the oak tree in the middle of the frame, and even that will be obscured up to about chest level by the forest understory.

Actually, I want to try a couple of things with my little experiment, though I won’t bore my readers with every step of the process. I will likely take a couple of photos that show the in between stages of this view, as well. And I want to take photos in the other directions, too.
This morning I marked the spot where I took this photo with a little ribbon, so I can be sure I’m standing in the same spot whenever I take the next one, which will probably be sometime in April. I expect that the spot won’t reach its fullest amount of obscurity until late June, perhaps even July.

In winter with the snow cover on the ground, I forget just how many trees lay on the forest floor. Sometimes it seems as if there are as many downed trees as there are standing ones. Most of the trees you see here, both on the ground and upright, are oaks. I have both red oak and white oak. I also have a nice collection of boulders here on the mountain—not as many as in, say, Devil’s Den in Gettysburg, but a good number. And there’s an area higher up on the mountain where there are as many rocks as Devil’s Den. Roundtop’s maintenance crew calls it "snake country."

I’m not sure precisely why I’m starting this little experiment; perhaps it’s just so when I start whining about feeling a little closed in by the greenery that surrounds me, I’ll have some proof of what that looks like.
Posted by Carolyn H at 8:58 AM

This is a terrific idea! I might just try it too.

I think my woods is right on the edge of turning green again. I look forward to your experiment.

I look forward to seeing the transformation. A friend in art school once did a similar project, taking a photo of the same place every day for one year. He then made a video of the images in succession.

That's a nice experiment, I'll keep an eye on that view!

Dana: I did a similar experiment years ago, though I didn't make a film of the results. At that point, I only had a polaroid camera, so you had to line them all up to see the changes.

My next planned photo of the spot is as soon as I see the first hints of green.

Great idea. It's neat to see these sequential photo sets of seasonal changes.