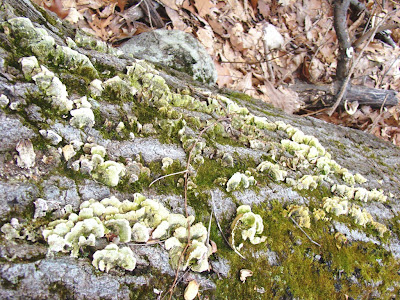 This morning as I stepped outside to head to work, I heard the familiar sound of an Eastern Phoebe calling nearby, the first time this season I've heard that call. Naturally, I quickly scrambled for my birding records to see how today's first arrival date stacks up with other years, and I discovered that March 18 is profoundly average for a phoebe's first arrival in my neck of the woods.

My fungus photo today is, I think, a cerrena unicolor fungus, a smaller, vaguely turkey tail-ish polypore (the shelf-life fungi). It pretty much covered the log you see it on here, and what wasn't covered by the fungus was covered by moss. This log is well on its way to being eaten by the forest.

I now own three books on mushroom identification, the third a nice regional guide to mushrooms and fungus in my area. The other two are standard fields guides that cover North America. All are useful, but I need all three of them to make even a reasonably accurate identification of the neat fungus I'm seeing right now. And at this point, I don't think my semi-accurate identifications are going to improve all that much, for a couple of reasons. One reason is that there are a lot of mushroom and fungus species, and every fieldguide I've seen so far picks the commoner ones and uses photos that are most typical of that species. Even a guide with 300+ mushrooms and fungus is only hitting a fraction of what's really out here in the woods.

A second reason is that the identification experts report that the only way to accurately identify most/all/some of the fungus and mushrooms is to collect them, cut them in half and/or produce a spore print to check the color of the spores, which for the mushrooms that have them, is critical to their identification. Doing that destroys the plant, and my interest in knowing what the name of the plant is isn'ts extreme enough to want to kill them. So I will identify what I can and make guesses to the rest. I'll let them do their job of eating the forests and creating soil for more forests and leave it at that. Collection may be necessary but that's what they used to say about birds too, and we look with a degree of horror on that old practice now. So I'll just keep on photographing them and enjoying them where they are.
Posted by Carolyn H at 8:22 AM

For what it's worth, picking fungus doesn't kill it. It's more like picking a flower than collecting a bird (the visible mushroom is just the fruiting body, the bulk of the organism is made up of the underground/in-log hyphae). Even then, it's my understanding that if you pick a reasonably mature fungus, the spores can still be viable, unlike seeds when you pick a flower. Even so, I find myself to be a reluctant collector, if I collect at all. I prefer photographs and accept that identification to species is not always possible.

this looks like the fungus on my dead oak tree. The arborist said once this fungus appears, it won't be long till the tree falls.

I'm happy to read your phoebe report. This is a fun time of the year in that the spring migrants dribble in at a rate that can be reasonably followed, unlike the flood in May. I'll keep my eyes open for the first phoebe here in eastern Massachusetts.

Matt: thanks for the information that picking a fungus doesn't kill it. But I still think I'll just photograph them!

Dana: the tree that this fungus was on was an oak, so your fungus may well be the same thing.

Mojoman: I like early migration too. In May, the little warblers are here and gone all in the same breath.

not everyone appreciates fungi like we... when i finally blogged about something other than fungi this winter, my family sighed relief... "finally! Something besides fungi!"

Jennifer: my familiy doesn't read my blog, so I don't worry about them not liking fungi. Hopefully, my other readers like fungus enough to last through my latest obsession.