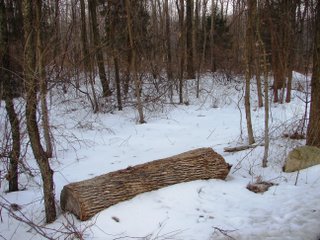 Melting snow changes unidentifiable lumps and bumps in the forest to identifiable objects. This old log is newly visible this morning. Each morning of this week has brought some new object into view, as the snow is melting a little each day.

This morning I also saw and heard the first robin of the new season, followed by a sighting of several killdeer (though I’d first heard one the day before). Spring is on the way, and if I had any doubts of that, rain is in tonight’s forecast, not snow or ice.

Tonight’s rain, which will fall atop the snow and ice, will likely bring a new season’s set of problems—basement flooding. So last evening I was outside where my basement drain hose is, first trying to locate it under several inches of snow and then chopping the snow and ice away from it. Then I dug out my battery-powered sump pump (useful if I lose power) and my electrically-powered sump pump in anticipation of tonight’s weather.

With so much snow cover on the mountain, an inch or two of rain will dissolve a lot of it and that often causes my basement to flood when the ground gets saturated (or is still frozen as is the case today). So over the years I’ve accumulated an arsenal of equipment to deal with it. Keeping track of what’s going on in the basement is still more labor-intensive than I like, but it’s still preferable to manually bailing out this small area, which I’ve also had to do.

Living in a cabin in the woods has many joys but anyone contemplating such a move should also anticipate having to deal with things most town and city dwellers don’t think about. I’ve found that each season has its own set of worries. Losing electricity in the summer isn’t a big deal, but losing electricity in winter (or when the basement is flooding) is another matter.

So the change of season brings out a new set of equipment. Gone are the snow shovels and the ice melt. Ready for action are the sump pumps. I hope I won’t have to use any of my equipment tonight, but at least I’m ready. I hope.
Posted by Carolyn H at 8:24 AM