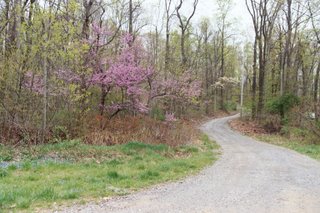 I took this photo last weekend looking up the lane as the road winds up the mountain and towards the cabin. The redbud and dogwood are in color right now and really pretty. In another week, perhaps less, the redbud will fade and turn into nothing more than a stunted-looking tangle of a tree.

This morning, I had the first good sighting of a warbler. A yellow-rumped warbler was singing right outside my bedroom window, much to the enjoyment of The Bad Cat, who looked like a frozen drooling statue with his nose pressed against the window. My hearing has never been very good, but even I can recognize the song of the yellow-rump, primarily because it’s just a little twitter, not unlike a singing junco. I had the window open a few inches, so the bird was really only 6-8 feet away from my ear.

I had a light frost last night and perhaps will again tonight, though the temperature warms well into the 50’s quickly enough in the morning.

Unlike most springs, this one really has been pretty and not too muddy, though that has been at the expense of the water table. Two inches of rain over 2 days last weekend wasn’t enough to make up for the water deficit. It has been enough to make everything pretty.
Posted by Carolyn H at 10:53 AM