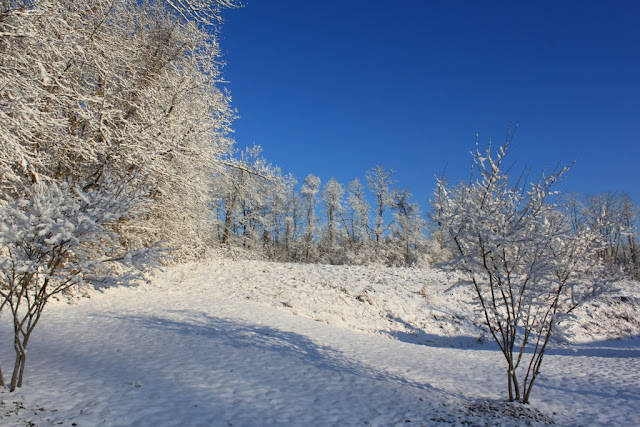 Yesterday brought a pretty little snow to Roundtop Mtn. and the surrounding hills. The snow was the sticky kind that sticks to every tree and twig, turning the entire landscape white.

At the cabin, the snow was close to 3 inches but soon started to compress. Off the mountain, the area had about an inch. That brings the grand total for the winter season just under 6 inches of snow, far less than a normal winter. That doesn’t count “Snowtober” when 10-12 inches fell in the off season.

Normally, this area sees about a yard of snow each winter, with many winters running between 40-50 inches of snow. Most winters with less than average snows are still cold, and those years have tended to be drier ones; it’s not usually a matter or replacing snow with rain. This winter both snow and cold are lacking, and the precipitation has mostly been as rain.

Not yesterday. For a little while at least snow fell and made everything look like winter. This morning, the sky was sapphire blue and perfectly clear. This little snow won’t last very long. The daytime temperatures will melt it quickly. But this morning was gorgeous and teased me with a taste of what a winter should always look like. 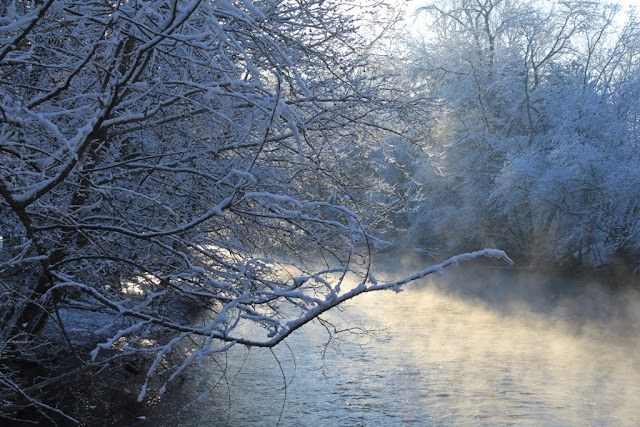 About a pretty inch of flocking snow here just outside Philadelphia--now, in last afternoon the day after--mostly gone.

Oh beautiful - the light and faint edges truly look like a painting!

Carolyn - I love this last photo, with the snow still clinging to branches and steam rising from the water - lovely!

Scott: The first inch was gone down in the valley but still there up on the mountain. Then I got a second inch.

Jeanette: thanks! The early morning light and the steam made for a nice combination.

Cynthia: I love it when the snow sticks to every little twig. That never lasts very long. The steam rising from the creek was extra nice and an unexpected touch!