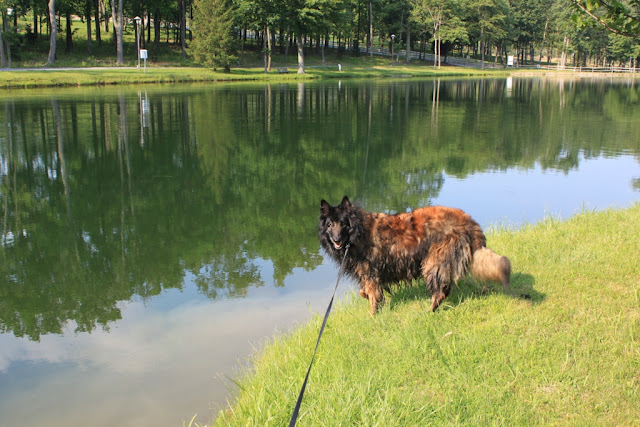 One bit of news I’ve heard mentioned a lot this year in the news media is that the wacky weather this year is caused by global warming. Right now, I’m having August in early June. August may well be my least favorite month, and only its proximity to September and the promise of eventual cooler weather gives me any relief.

News people are saying here that what we now consider a hot summer will pass as a cooler summer by the middle of this century. I’m glad I’ll be dead by then because this heat is no fun at all.

Last night I took Dog down to one of the snowmaking ponds for a swim. Now that he’s 10, I didn’t want him pulling some of his antics from his earlier years, so I kept him on his long lead while he swam. When he was younger, he’d try to chase the resident geese by swimming after them, a fool’s adventure if ever there was one. And then he’d get so tired and swim so far that I feared he wouldn’t make it back to the shore.

I didn’t want any of that to happen this time, so I kept him leashed. The photo today is after he’d taken his initial swim but before he took his second or third or fourth swim of the evening. Eventually, he got wet all over, and he was relegated to the back deck until he dried off. In this heat that didn’t take very long. Is winter ever coming??
Posted by Carolyn H at 10:17 AM

I heard the same prediction on the radio this morning ("cool summers in mid-century will be hotter than hot summers in the '90s") and my reaction was exactly the same as yours: I'll be glad I'm dead.

Kali and I were walking along the Schuylkill River in Valley Forge National Historical Park two weekends ago and a runner unleashed her dog, which promptly headed for the river in pursuit of a raft of geese. The dog didn't have a chance of getting the geese, but it was being swept along by the current. It scared Kali and me, but apparently not the owner.

With a coat like Dog has ... why he really needed that swim. Sounds like you could use a dip yourself. I don't like heat either. We've had it cooler and wetter than usual but when the sun comes out ... yep it gets hot mighty quick. Makes me extra thankful for the cloud cover we've been getting. Hate to think what August will bring.

Scott: And another bad thing about hotter summers by mid-Century is that it likely means winters aren't going to be very much, either. I'll think I'll move north, just so I can see four seasons again!

Cicero: I just had quarter-sized hail from a strong thunderstorm. AT least the temeprature dropped 20 degrees!!