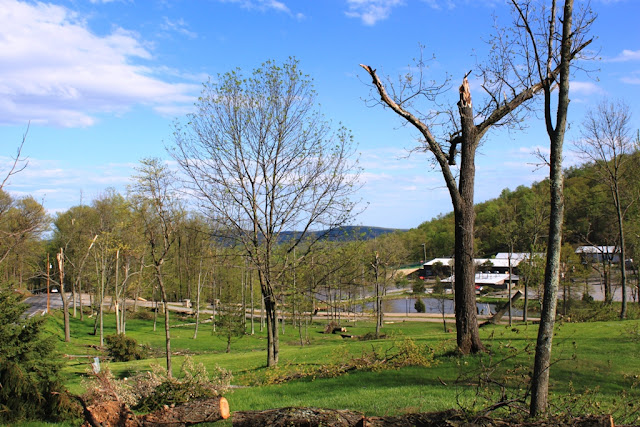 Last evening the weather was glorious, which is normal after any severe storm but feels a bit cruel, too. Under the bright sky after the tornado, the damage is somewhat worse than I first saw yesterday morning.


The vastly improved conditions gave me a chance to better look at the damage from the morning's storm.  Sometime yesterday the weather folks confirmed it was an EF1 tornado that caused the damage.  An EF1 tornado is the second least destructive on the scale of 0-5, with winds estimated at 86-110 mph.   Roundtop's weather station was just yards from the worst of the damage, though not in its direct path, and still managed to record a wind speed of 80 mph.  Probably this tornado was in the lower to middling part of the EF1 range. This photo shows the public Roundtop Rd. to the left and the driveway in to the ski resort branching off to the right. 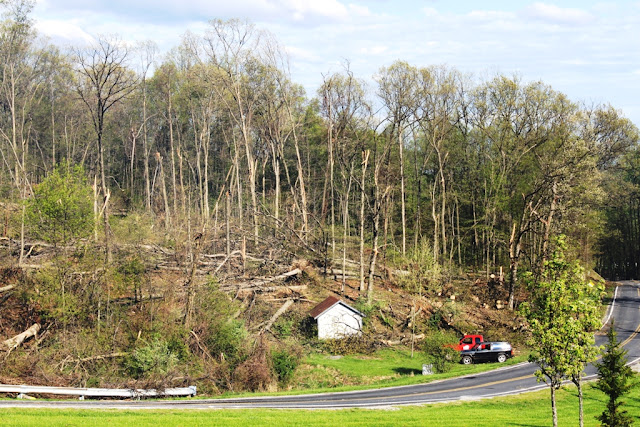 I also learned yesterday that several of the buildings at Roundtop some relatively minor damage.  An old building that housed the original snow-making compressors was torn apart.  Those compressors hadn't been used in years and the building was old, and not in great condition.  Also the ski patrol chalet has a basketball-sized hole in it at one spot.  Currently, it's not known what caused that hole.
The forest on the hill across Roundtop Rd. from the resort's driveway is flattened.  The little pumphouse at the bottom of the photo looks okay, though.  The flattened trees extend uphill a short ways beyond the left side of this photo, but not too far.  I have noticed a few trees further up the hill that were damaged, but not so many, just a few deeper within the forest. 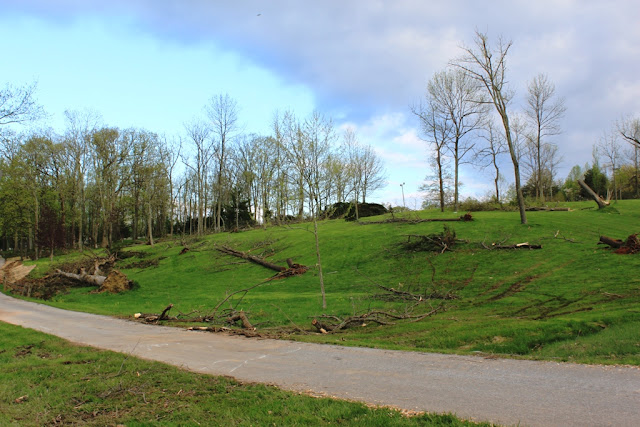 This last photo was taken along Roundtop's driveway this morning, and you can see just how many trees were flattened here. A whole phalanx of tree-trimming trucks were at work when I left this morning. By tonight, likely all that will be left are stumps.
My hope is that when trees are replanted to replace these, that they choose native species, oak and hickory perhaps, and not put in the ubiquitous Bradford pear or the like.
Posted by Carolyn H at 9:48 AM

John "By Stargoose And Hanglands" said...

Just scrolling up or down the page, the sudden transition between your "Wordless Wednesday" images and those of the storm damage is striking. Makes me thankful that tornados of whatever strength are extremely rare in England.

Tornados are supposed to be rare on mountaintops, too! They are usually flatland storm.

Whoa, that serious damage. You are very lucky that it miss your cabin. Even EF1 can kill.

I've never understood the reasoning behind the landscaping decision to use such trees as Bradford pears over, say, oaks and hickories, or even one of the ashes or a sweetgum.

You know, seeing all the downed trees, I'm even more amazed you somehow managed to keep power and Internet, as there must have been hundreds of big limbs coming down along the road.