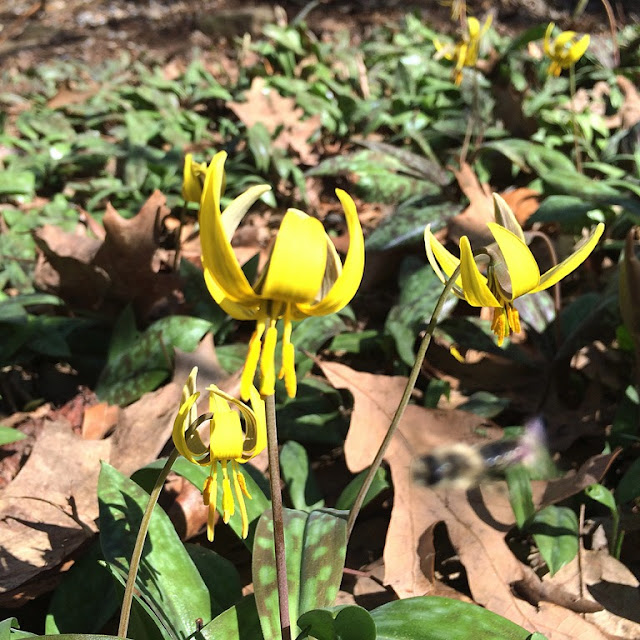 The trout lilies, aka dog-toothed violets, are blooming just two steps from my bottom step.  It is a large patch, perhaps 7 ft by 5 feet.  It grows a little larger each year and has been in that same spot ever since I’ve lived in the cabin, and who knows how long before that.
This morning I am blessed in a dry season with a bit of spring drizzle—not much unfortunately. Enough even so to make the birds sing and see the leaves of the smaller forest trees now edged with pale green.  The rue anemone are blooming, too.


So, it is spring, and it feels like an early spring after one of the warmest Marches ever.  Looking ahead, the first half of April, at least, looks cool.  Perhaps the weather will keep spring at this level for a while.  I would like that for I like this time of year before the oak leaves burst open, before the underbrush makes woods walking difficult.  It’s a bit like November after the leaves have fallen, but warmer.  It’s a time when I can see over to the next mountain, and sounds aren’t yet muffled by the leafy canopy.  I wouldn’t mind if this time of year stayed for a while and didn’t rush into summer or even full spring.  Perhaps it will happen.
Posted by Carolyn H at 9:48 AM No comments:

I’m still coughing from that dratted, awful cold but mostly I am back to normal.  Here on Roundtop, spring is starting to spring.  I see yellow-rumped warblers fairly regularly.  The American coot that set up shop on the little snowmaking pond is still there. The bird seems healthy and happy, but why it has chosen this little pond to hang out on when bigger ponds and lakes abound isn’t something I understand.
The dog-toothed violets/trout lilies/etc. are just about ready to bloom.  The stalks are up but the flowers aren’t yet out.  I will check the patch later today again, and I wouldn’t be surprised if a few flowers open before evening.
Except for two days, the entire month of March here has been above average in temperature.  For a while, it looked as though the month would rank in the top five warmest March’s since recordkeeping began.  Those two cooler days were enough to drop the month into the #7 slot.  So far the month is 6.7 degrees warmer than average, which is pretty warm.


At the moment the wind is fierce, following a day of light showers and fog.  With this kind of wind I don’t venture outside very often or too much.  It’s the kind of wind that brings down branches but hopefully not trees.  Still, I feel a lot safer with a roof over my head.
Posted by Carolyn H at 1:13 PM 2 comments:

I have had the worst cold of my life for going on two weeks.  My sister gave it to me, and I told her during the worst of the cold that if I’d gotten this cold ten years from now it would either kill me or put me in the hospital.  I have now returned to the land of the living, though the cough and some remnants still remain.  No long walks in the forest for me just yet, but I am well enough to wander around my own little acreage.  And that is where I discovered the first leaves in my dog-toothed violet/trout lily patch.
The pretty bi-colored leaves aren’t hard to see, but they can be hidden by fall’s leaves as they are only up by an inch or two at the moment.  It’s a good thing the flowers aren’t out yet.  Tomorrow I will get what is virtually certain to be the last gasp of winter on what will be the first day of spring.  Several inches of wet, heavy snow are predicted, a true “onion” snow, as such things are called in this area.
Other signs of spring are popping up.  Spring is not yet exploding but it’s moving forward, about like when the first kernels of the popcorn start to pop.  The first phoebes arrived a week ago.  I have had an American Coot on the smallest snowmaking pond for a week now.  It shows no signs of leaving.  The ski resort has closed for the season, too.
As I type a local Blue Jay is performing its Red-tailed Hawk call.  It started doing that about 10 days ago and is so pleased with itself that it now calls all over the mountain.  It particularly performs the call just before landing in my bird feeders, perhaps hoping to clear the decks so it can have the feeders to itself.


I am glad this cold has nearly run its course in time for me to enjoy the start of spring, even if I have to shovel to get to the chicken coop one more time.
Posted by Carolyn H at 8:49 AM 2 comments: 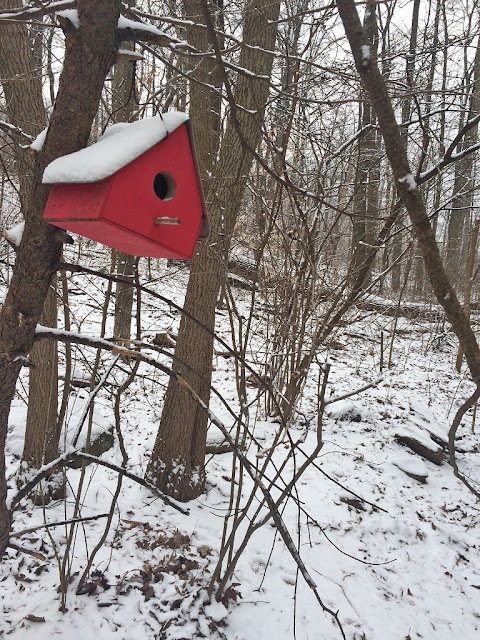 
So I am enjoying this little bit of snow this morning.  It likely won’t last much past lunch time, when the temperature rises above freezing. Despite the 31” blizzard of late January, 2016 brought fewer snow events than is typical. I only recorded 6 days with snow this winter, and half of those were about the depth of this little snow.  Last year was exceptionally snowy with 15 snow events against an average of 8. The snowfall in winter 2015-16 stands (so far) as one below average, though that big blizzard sure tried hard to make up for the lack.
Posted by Carolyn H at 10:22 AM No comments:

This morning I saw the first northbound skein of Canada geese, a long line of about 150 birds, far more than the 30-couple that are resident here on Roundtop.  The lone male red-winged blackbird has now been joined by several fellows.  The boys are settling on territory, arriving earlier than the females, who will decide later which of these singers with red chevrons on their wings has the best spot to build their nests.
With the disappearance of the snow cover, I can once again walk through the forest around Roundtop.  In much of winter I am restricted to plowed roads and pathways.  Even once the snow melts, I avoid the worst of the mud.  I own “Wellies,” which are great at keeping out the mud but not designed for long walks.  Last night saw a mild freeze, which froze the mud long enough for me to take an early morning walk.


Tomorrow a bit more snow is called for, which means today is the calm before the storm, and a beautiful, calm morning it is—ideal for a walk in the woods. Woodpeckers were busy; a pair of mallards were complaining about something, the bluebirds were singing.  Between them and the blackbirds, the songs nearly qualified as a dawn chorus, a harbinger of spring if ever there was one.
Posted by Carolyn H at 11:12 AM 3 comments: 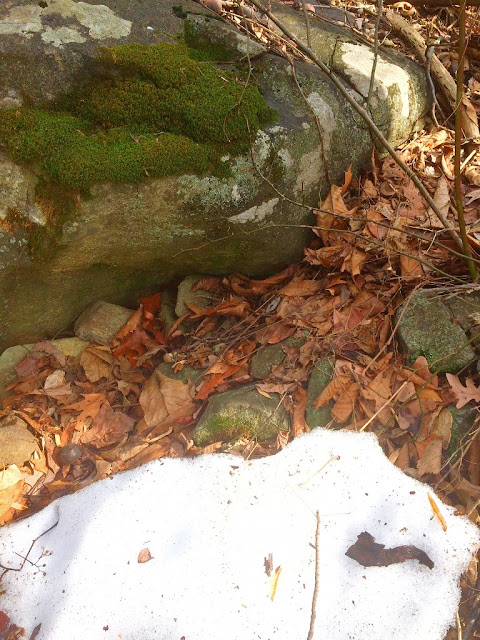 Winter’s snow is nearly gone.  Patches and piles remain, as does ice on the lakes and ponds.
After a warm day yesterday I really thought the ice on the lakes would be gone. So early this morning I went down to Pinchot Lake and discovered ice still covering it.  The small lagoon has open water and is currently populated by 21 Canada geese, but the waterfowl I’m most interested in seeing don’t like the little lagoon and can only be found on the large lake.  I would not want to try and walk on that ice at this point.
Of the “spring” birds I have so far only seen and heard red-winged blackbirds.  The robins were here all winter, and it became common to see robins foraging beside juncos, which I always find amusing.  Those species can’t be well acquainted with each other in this area as their timing doesn’t usually overlap, as it has this year.
February started out cold, but ended up warm and so ended up being a fairly average month in the temperature department.  I wonder how a leap year affects daily temperature averages.  As today would normally be March 1, do weather people compare a leap day to March 1 or keep it separate from the other days?  Do daily temperatures skew differently in a leap year because of the extra day?  It’s a thought I am pondering this morning on this once in every four year event.
Posted by Carolyn H at 4:03 PM No comments: 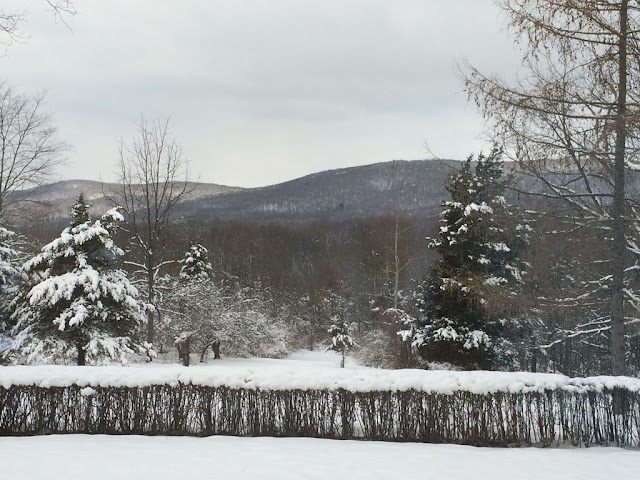 For the moment, the forest is snow covered. I say for the moment because I am in the middle of one of those snow/sleet/ice/rain storms that is a staple of southern Pennsylvania winters.   Even for here, this storm is extreme.  Yesterday morning was 4° and today the temperature will be in the 40’s! Yesterday I was dripping the faucets to prevent the water pipes from freezing, and today I am worried about flooding!
The feeder birds are feeding heavily. I still haven’t seen anything unusual here so far this winter, unless you count a sapsucker as unusual, which I don’t.  Not a siskin, not a redpoll, not a purple finch can be found.  The winter finch forecast was not encouraging, but it didn’t sound as though I’d have none of them, just fewer.


So “today’s” photo was actually taken on Sunday, when the snow was still lovely and not icy or water-logged. It may be the last photo of nice-looking snow for a while.  I took the photo from the kitchen of my family’s farmhouse, looking over to South Mountain. I never get tired of this view.  The mountains look different nearly every day of the year.
Posted by Carolyn H at 9:55 AM 5 comments: