Out of the blizzard! 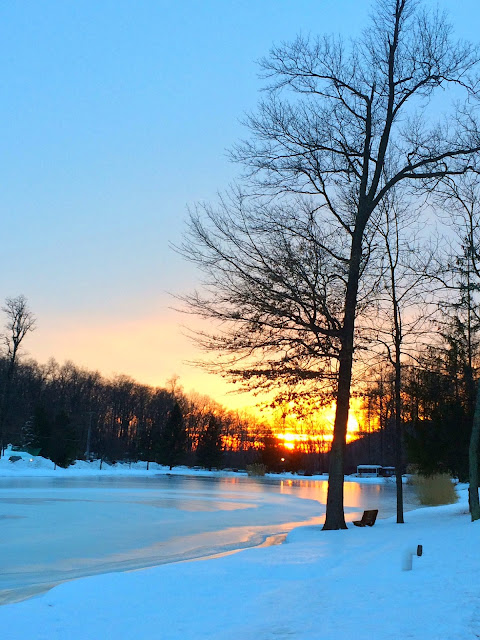 I’ve been quite lax recently in keeping up with Roundtop Ruminations, and for that I apologize and will try to do better.  Lately, I’ve been taking photos and posting them on Facebook, mostly due to a lack of time. Feel free to friend me there, if you like (Carolyn Hoffman).  Those photos go up pretty much as soon as I take them, though often with a cellphone, as that is more quickly at hand, especially when I am walking the dogs.
Most of this past week has been spent shoveling 31” of snow that fell during the blizzard of 2016.  With help from Roundtop Mountain Resort, I now have my car dug out in and in my driveway.  Plus, the sibling, sibling-in-law and I have also gotten the farm’s driveway plowed out and dug out, at least as much as it’s going to get done.
The chickens have gotten over the shock of seeing so much snow, but still haven’t found their way clear to lay me any eggs.  I hope that changes soon! I can’t say I blame them, though.
Around the cabin, I’ve been seeing deer and turkey. They have been using the plowed driveways and walk paths for their own travel, as that is much easier than wading through so much snow, though doing so brings them closer to people.  They don’t appear to mind this. Somewhat to my surprise, the Carolina wrens are still around.  After a big snow in 1993 or 1996 they disappeared for several years.  Those little southern birds like to roost and nest under tree roots and similar ground tangles.  In heavy snows they are buried and can suffocate or starve.  But in this snow the birds were out and about the day after the blizzard, so they made it through this time well enough.


My feeders have been busy with birds—nothing rare this winter—though I have had some local birds that don’t normally appear in my feeders show up demanding food. The blue jays have been out in force, as have a pair of crows.  I think this is the first time I’ve had the crows in the bird feeders.  Naturally, these large birds empty the feeders faster than the little ones.  One of my errands today will be replenishing the bird seed.  I am nearly out, and the birds are counting on me!
Posted by Carolyn H at 10:23 AM

Carolyn: I've been lax about keeping up "It Just Comes Naturally," too. I get depressed in the winter (SADD?) and lack motivation, and there's also not much of note to post about right now. We got "only" 20 inches of snow (that was enough for me for the rest of the winter), but most of it's gone now since we've had sun and very moderate temperatures lately. Philadelphia's average annual total snowfall is 22 inches, so we all but got the average in one storm this year. However, I also reviewed the list of the 10 largest snowfalls every recorded in Philadelphia, and 7 of the 10 have occurred in the last 28 years, so clearly there's an upward trend in record snowfalls--probably a result of climatic changes associated with global warming. I hadn't been feeding birds at my feeder before the storm, but I certainly stocked it up to help them when the snow came. I, too, have had nothing particularly unusual, but I did have a large flock of female Red-winged Blackbirds (at least 30 individuals) who returned too early, and I had one Fox Sparrow and one Eastern Towhee. I'm glad I was able to help them through the storm. We've got a lot of American Robins around; after they stripped the crabapples and winterberry hollies, I have no idea what they're eating.

Scott: The Harrisburg snowfall average is 39", so I'm going to need another 8 inches this winter to get to average. But that big blizzard certainly made up for the lack of snow in December and most of January! Robins were here in droves before the storm and still here, but in much reduced numbers, now. It's a funny winter.