How long will it last? 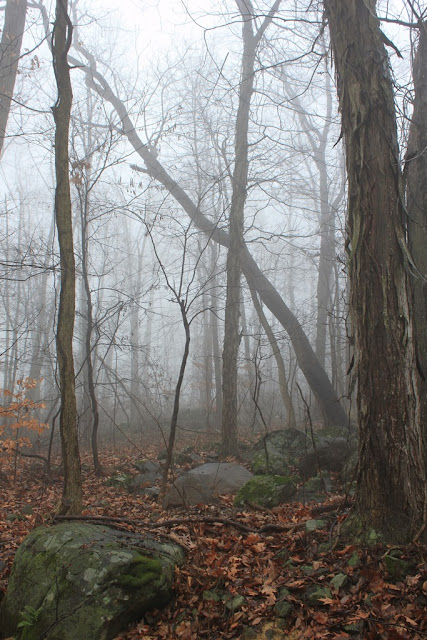 This photo was taken on December 23, and I’m posting it for one reason only.  This tree looks as though it will fall before long, and I wanted to document how long it would be before that happened.  I’m not sure when this tree began to lean so precipitously, but it hasn’t been that long.
I walk by this spot every day with the dogs, and I do try to make a habit of noticing things.  I might have missed seeing it lean for a few days, as I couldn’t see this far into the forest due to heavy fog or because I was walking when it was still mostly dark, but I doubt I missed it for longer than that.  Even now, I’m not so sure that the only things keeping it from falling aren’t the medium-sized boulders at its base.  And no, I probably won’t get much closer than this to investigate.


The tree is leaning from south to north, so a southerly wind might well do it in, though southerly winds are mostly blocked at this spot by the mountain that rises behind the tree.  Still, it won’t take much to bring it down—a moderate ice storm, a heavier rain, perhaps even a heavy snow.  I just want to see how long it takes between when I took the photo and when the tree actually falls.
Posted by Carolyn H at 10:03 AM