rainy, chilly but could be worse The week-long rain and overcast is finally over. The sun peeks through clouds occasionally this morning and shows every sign of soon winning the day.  I am fortunate that hurricane Joaquin didn’t arrive here and add to the already soggy ground.  For a while it looked as though that might happen, and that could well have been catastrophic.  Instead, Roundtop is just starting to dry out, and the weather feels like fall.

The temperature reached as low as 55 in the cabin this past weekend, while I resolutely refused to turn on the heat so early in the season.  I try to go until November 1 without heat, though I have given in, occasionally, on the last week of October.  I’ve never given in on the 3rd or 4th of October, however, and I wasn’t about to start this year. And now that the outside weather is returning to normal October ranges, I don’t have to think about it.  This weekend, the weather was cold enough that all the cats and half the dogs cuddled on the bed with me.  If you’d seen that bed you might have thought it was January.  In a blizzard. 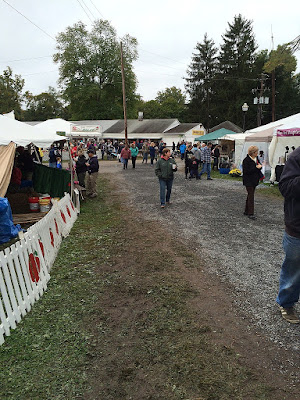 By Sunday the rain mostly stopped, and though the sky was still overcast, the clouds were higher than earlier in the week, a promising sign.  I took advantage of the improving weather to go to the Apple Harvest Festival in Arendtsville PA, an annual two-weekend event of outrageously decadent food and hundreds of craft vendors and activities. I did manage to avoid the worst of the fried foods, where items that never occurred to me to fry, are.  Naturally, every stand has something apple-based—apple sausage, apple pancakes, apple fritters, turnovers, bread, coffee cake, apple crisp, caramel apples, fried apples and dozens more. I settled for the hot spiced cider, which tasted even better than usual on a raw day.  Even the non-apple staples like pulled pork or pit beef tastes better prepared outside over a wood smoke fire.

To me the festival marks the start of the Christmas shopping season, though I often come home with things for my house and not for someone else’s. My intentions are good, though.  This year I really coveted a finished tree-branch coat stand, and if it hadn’t been so heavy and needed to be carried out of the festival grounds, wrestled onto a shuttle bus and then walked to my car, I would have come home with it. Some things just aren’t meant to be.

I went early in the morning, hoping to beat the crowd, which worked for a couple of hours, though by early afternoon the crowds were near the normal crush.  I suspect that for most of the attendees, myself included, the day marked the first time we’d had our coats out since the spring.
Posted by Carolyn H at 2:53 PM