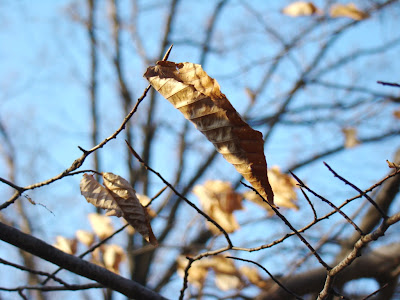 Likely this thaw won’t last. It’s not uncommon to have a January thaw in this area that lasts for several days or a week. We didn’t have a January thaw this year. It waited until February for that. If this thaw lasts more than a week or so, it will be both unusual and cause for concern. Rising sap could cause the buds to appear and everything from fruit trees to dogwood blossoms could then be damaged or destroyed when the weather returns to normal again.

But for a few days, I won’t worry about that just yet. For now, it was enough to be out in the sun on a warm day and enjoy a vacation from winter without ever leaving the area. At this point, one or two days into the thaw, there’s no sign of spring. There’s simply mud and decaying leaves, wet and flattened from weeks of being covered by snow and ice. This is a good thing. It means last year’s leaves are already turning into forest loam. Some years, when it is dry through the winter, last year’s leaves greet the spring still crunchy and not much decayed. A normally wet and snowy winter moves that process along nicely.

The other thing I noticed is the number of trees with marcescent leaves, such as those in today’s photo. In this area, that pretty much means I’m looking at a lot of American beech trees, though a very few others, often oak, will have them, too. Marcesence simply means that the trees hold on to their leaves until the new leaves push them off in the spring. Sometimes, as the new leaves are just starting to come out, you’ll see both the new leaves and last year’s leaves on the same tree.

Scientists argue about what causes marcesence and whether its effects are positive or negative. Sometimes one will say the effect is positive when another calls the same effect negative. I find their arguments interesting but so far have found nothing in them to get overly concerned about. Here on Roundtop, marcesence on beech trees simply is a normal way of the forest’s life.
Posted by Carolyn H at 8:51 AM

At least this thaw up here is getting rid of some of the snow. Today was nice day and I was stuck at work.

I don't why some scientist think that marcescent leaves would be bad. After all, not all the leaves stay on the tree. To me the leaves are just stuck to the branches and they couldn't come loose when the time came.

So far snow hasn't been in the forecast for this week. nor I'm I looking for it. i had enough for this year.

The January thaw amazes me, it's one of our last great meteorologic mysteries ...