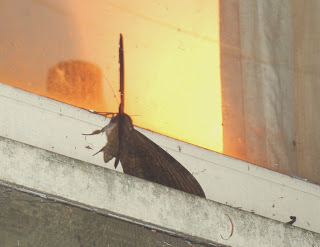 This photo of the Black Witch moth (ascalapha odorata) is not as good as the one I posted yesterday, though I think you get a better indication of its giant size in this photo. I also have good news about this sighting. Both BugGuide.Net and the Butterflies and Moths of North America sites have accepted my sighting record! Butterfliesandmoths.org will update their state maps in January to include York County as the second spot in Pennsylvania where this moth has been seen. I feel as though I’ve just used up 30 seconds of my 15 minutes of fame!

So now that Seabrooke identified the moth for me, I’ve been doing some research about this fascinating moth. It’s the largest moth, perhaps the largest insect, found north of Mexico. No doubt because of its extraordinary size, the Black Witch has a long and rather checkered folklore to accompany it. It’s also known as La Sorciere Noire, as well as the even more ominous Mariposa de la Muerte. Virtually all the common names allude to death, witches, sorcerers and the like. The most benign common name was Mah-Ha-Na in Mayan, which means "may I borrow your house" as it is not uncommon for these things to find their way indoors.

The Black Witch is common in Florida and the Rio Grande Valley, migrating north out of Mexico and Central America. They have been found in all 50 states, though Alaska only has a single record, apparently.

Death myths abound surrounding this lovely moth, mostly in force only if the moth gets inside a house. Here’s a few: a sick person will die if this "butterfly of death" enters the person’s house; the person will only die if the moth visits all four corners of the house (I can just imagine the rush to prevent this one); or if someone has already died, the moth is said to be an embodiment of that person’s soul returning to say goodbye.

A few myths are good ones—you’ll win the lottery or come into money if the Black Witch lands above your door and stays there for a while. In the Bahamas they are even call Money Moths or Moneybats. One myth is a funny one—if the moth flies over your head you will lose your hair.

So how did this tropical, far southern moth end up fluttering at my bedroom window? This moth has been confirmed to be seen within the eyes of hurricanes, and since Ike and Gustav both made an appearance here, perhaps instead of a hurricane bird, I got a "hurricane moth." I’m not complaining, and if you’ll excuse me, since I don’t feel ill I’m going to go buy a lottery ticket.
Posted by Carolyn H at 8:37 AM

That's really neat that they accepted your sighting! The folklore is very interesting. I wonder how the losing hair one came about?

Lucky you to find such a treasure!

Lynne: yes, I'm pretty excited about that, too. The whole process was a lot easer than getting a birding record approved, that's for sure!

Very good news Carol! Curiuos, Are they going mention your name too?

Cathy: I don't know if they're going to mention my name or not. I didn't ask. If they mention anything, they might give the location as Ski Roundtop, but as a sighting this far north is so serendipitous, even that doesn't mean much. I mean, these things aren't like rare birds that hang around and attract flocks of list-manic birders.