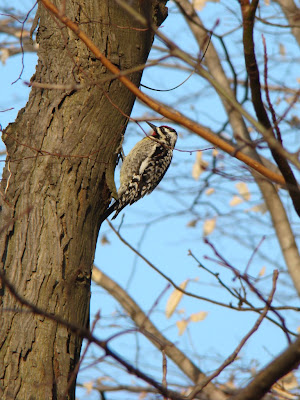 This morning has already brought me a multitude of spring surprises. Isn’t that just like spring? Days go by where nothing much happens and then bam!—everything happens at the same time. But let me back up just a little. The first of the spring surprises actually started last evening.
Last evening was warmer than the windier midday hours, and I was enjoying that, walking up and down the front forest, just checking out the progress of the spring growth. It was not much different than it had been in the morning, and I was about to head back into the cabin when I heard the song, "Drink your teeeaaa." Well, I don’t think that’s what they really sound like, but that’s the accepted mnemonic. To me it sounds more like "Sink or swiiiim" but that’s just me. In any event, the first eastern towhee was now calling in my edge of the forest. This is actually a late first appearance for the towhee. In 2006 my first sighting was the end of March. Last year the first appearance was April 4. Perhaps the dismal weather of the past week detained them.
The rest of the spring surprises began right away this morning when I first saw the clouds had finally cleared overnight. So when Dog and I started our usual 5:30 a.m. walk, the morning was noticeably lighter than it’s been so far this year. After more than a week of overcast skies that kept our early morning walks as dark as winter, this difference is a welcome change.
The dawn chorus of singing birds was loud this morning, the first time I can say that this year. Oh, the chorus has been present for weeks now, but it hasn’t been loud until this morning. This morning it was loud. I heard several towhees, not just the single one from the previo 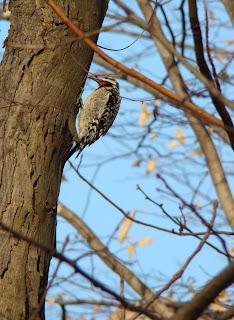 us evening; plus cardinals, titmice, phoebes, a great horned owl, the ever-singing robins, juncos, song sparrows and the mockingbirds, just to name a few. This particular mockingbird, by the way, does a great mallard alarm call that is good enough to put this impressionist on Jay Leno.
And then it’s almost time for work. I’d even loaded up the car when a sapsucker flew right past me. A yellow-bellied sapsucker! They are uncommon in my woods, and it’s typical for me to have only a few sightings each year. Even those are most typically younger birds in December who just can’t quite work up the nerve to migrate yet. Interestingly, though, last year I had a sapsucker sighting on April 8, so the timing of their migration in both years is apparently much the same.
I started to try and take photos of this bird, but it wasn’t very close, bouncing from tree to tree. I zoomed in a bit and hoped I could zoom in even more once I got the shots in a computer. Then the bird flew a little further away, and I figured the morning’s unexpected event was over. I was putting the camera back in its case when the bird suddenly flew towards me and proceeded to hammer no more than 20 feet away, closer than it had been throughout this entire sighting. And this time, it was close enough for a few good shots before it flew off again, this time for good, deeper into the forest.
I can hardly wait until I get home tonight and see what the rest of the day brings.
Posted by Carolyn H at 9:54 AM

Great shots. what a glorious morning. Thanks for sharing

What a bunch of surprises!!

Yea for spring! I love that early morning time when all the birds are singing their hearts out!

What a fun spring morning you had! I got excited just reading about it!