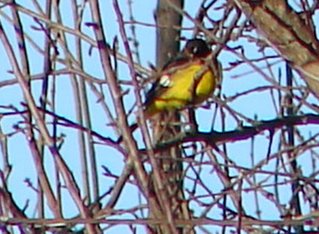 It took six times but I finally got to to see the Scott's oriole that has been hanging out eating fruit in a subdivision near me. It's not a great picture. I don't care! I got to see the bird, so I'm happy.

I headed out early on Saturday morning, not so much because I expected to see the bird that early but because I expected hundreds of people to show up to look for it, and I didn't want to park a mile away. I arrived around 7:30 a.m. and was able to park closer than I expected. As I was walking towards the house I saw perhaps a dozen people, binos up, all looking in the same direction. So I figured they were on the 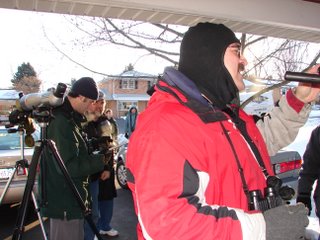 bird, which they were. So after 5 times of not seeing the bird at all, this time I walked right up to the spot where the others were, raised my binos and spotted the oriole.

The second photo is just a few of the other early morning birds who showed up to see this first Pennsylvania record of this bird. Until Saturday morning, the homeowner's logbook had tallied 60 people. How many more they got on Saturday I have no idea.

My joy at finding this bird and seeing it in Pennsylvania is tempered by the idea that the prognosis for this bird is rather grim. If it stays in the region, it will never find a mate. The poor thing will have to find its way back to Texas, New Mexico or Arizona to find one. And I had more snow today, which can't make a bird from the warm southwest very happy. The homeowner has been diligent about feeding this bird orange slices (and also strawberries), which is keeping it from starving in this cold weather. I hope it is able to withstand today's snow, as anything that has been such a joy for the people seeing it should be able to have a little happiness of its own, as well.
Posted by Carolyn H at 4:32 PM

I was hoping you got to see your bird!!! Picture is great, clearly you were at the max with the zoom.

Boy, was I ever at max zoom. More like double-max zoom. In my original photo, you can't even seen the bird--okay, maybe a yellow spot in a sea of twigs. Then I zoomed in on my photograph--getting another 12x that way--and then I zoomed in on that photo a bit more. I'm surprised the quality was as good as it was. But even bad quality is a good shot for this bird, as far as I'm concerned!